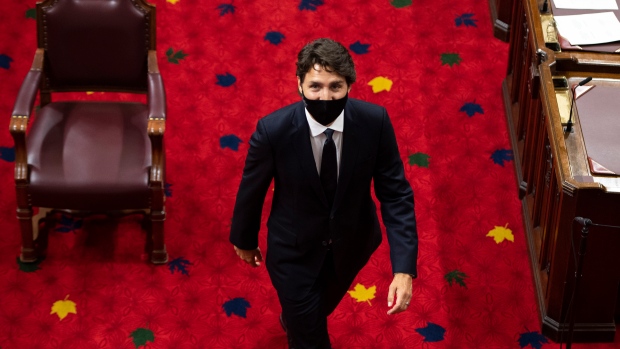 Prime Minister Justin Trudeau heads back to his seat before the delivery of the Speech from the Throne at the Senate of Canada Building in Ottawa, on Wednesday, Sept. 23, 2020. , THE CANADIAN PRESS/Justin Tang

The new money will go to "to trusted partners on the ground fighting COVID-19," Trudeau said Tuesday during a videoconference at the United Nations that he co-hosted with Secretary-General Antonio Guterres and Jamaica's Prime Minister Andrew Holness.

It was the second time since the spring the three held a meeting of the UN's High-Level Event on Financing for Development in the Era of COVID-19 and Beyond. Trudeau, Guterres and Holness held their first joint UN meeting in late May, less than three weeks before Canada failed to win a temporary seat on the Security Council.

Canada ran on platform of trying to help rebuild the post-pandemic world in a contest that pitted it against Norway and Ireland for two non-permanent seats on the council, starting next year.

Trudeau said after the Security Council defeat that Canada would remain active on the world stage in trying to rebuild the battered pandemic economy.

"Canada believes that a strong, co-ordinated response across the world and across sectors is essential. This pandemic has provided an opportunity for a reset," Trudeau said Tuesday.

"This is our chance to accelerate our pre-pandemic efforts to reimagine economic systems that actually address global challenges like extreme poverty, inequality, and climate change."

Trudeau said Canada will invest more in the coming years and he will continue to advocate for debt relief for developing countries facing economic hardship because of the pandemic.

Canada will push to have the voices of those countries heard in larger forums such as the G7, G20 and the World Bank, he added.

Guterres said he welcomed Trudeau's push for debt relief, adding he would be advocating for it in the G20.

He said the initiative would provide up to $12 billion in relief for participating countries.