Liberals will want an election, while anxiety and a bit of optimism exist: Nik Nanos

Prime Minister Justin Trudeau is heading into an expected election campaign with a major advantage: fully half of Canadians give him high marks for his handling of the coronavirus pandemic.

According to a poll by Nanos Research Group for Bloomberg News, 50 per cent of Canadians believe Trudeau’s government has done a good job of managing the crisis, while 23 per cent say he’s done poorly. Another 26 per cent are neutral.

Almost three in four Canadians believe their personal finances are better or no worse off than they were two years ago, the Nanos poll found. That’s in line with other surveys showing rising confidence by consumers and businesses as vaccines become widely available.

The strong numbers on his pandemic performance are a key reason Trudeau is choosing to call the snap election less than two years into his current mandate, and why he’ll seek to make the vote a referendum on his crisis management. 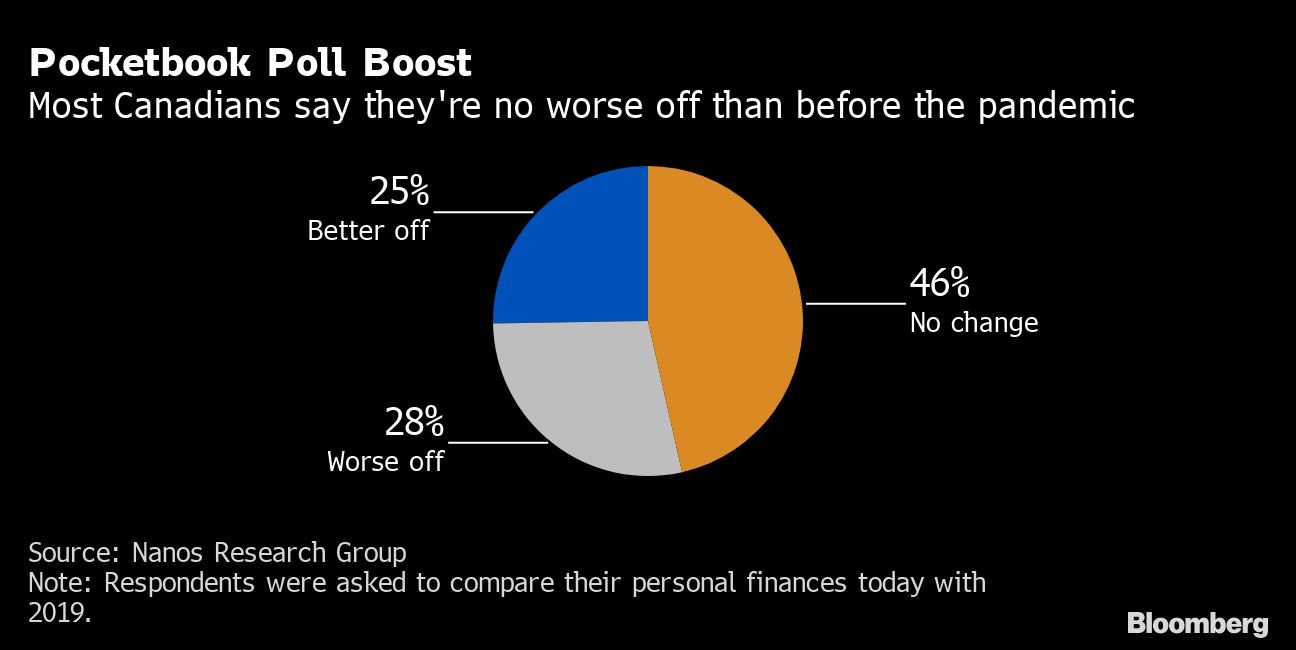 The government responded to COVID-19 with a fiscal plan that was among the most generous in the world. After a slow start, Canada has had one of the most successful vaccine campaigns of any large country, with more than 60 per cent now fully vaccinated.

“The Trudeau Liberals are in search of a political sweet spot wedged between a successful vaccination halo and before stimulus checks to Canadians get cut off,” Nik Nanos, chief data scientist at Nanos Research, said by email.

The prime minister is widely expected to trigger the start of the campaign this weekend. The vote will be held Sept. 20, numerous media outlets have reported.

Public opinion polls show the Liberals, in power since 2015, hovering at about 36 per cent support, which is near the threshold needed to regain control of parliament in Canada’s fragmented political system. Also factoring into Trudeau’s calculation is soft support for the opposition Conservative Party and its leader, Erin O’Toole.

Polling aggregator 338Canada.com gives the Liberals a 97 per cent chance of securing the most seats in an election, with near 50 per cent odds Trudeau will form a majority. The Liberals currently have 155 of the 338 seats in the House of Commons, so they must gain 15 to have a majority again.

A majority victory would represent a redemption for the prime minister after a near-death political experience in the last election two years ago, when his party lost the popular vote.

The mood among Canadians is improving. Most health restrictions have been lifted in recent weeks and the economy is poised to fully recoup its pandemic losses in coming months, while household net worth has risen by hundreds of billions, thanks in large part to a housing boom.

Another bit of good news is that the Nanos poll found his pandemic approval numbers were strong in rich-vote provinces like Quebec and Ontario. The survey of 1,002 Canadians was taken between July 20 and Aug. 2, with a margin of error of 3.1 percentage points.

Since the 2019 election, Trudeau has needed the help of other parties to pass legislation, allowing the opposition leeway to set the policy agenda -- though his pandemic fiscal packages have largely won cross-party support.

More problematic for Trudeau has been control that the opposition parties have had over parliamentary committees, which has allowed them to investigate the governing Liberals and prime minister over ethics.

One wildcard is a fourth wave of COVID-19 cases that will open Trudeau up to criticism he is disregarding public heath concerns with the election call. Canada recorded 2,138 cases on Thursday, the most since June, according to CTV News.

Opposition parties are already accusing the prime minister of opportunism.

“If Justin Trudeau is listening to people and their concerns and their worries he would not be holding a selfish summer election,” Jagmeet Singh, leader of the left-leaning New Democratic Party, said at a campaign-style event in Newfoundland on Thursday, where he released some parts of his platform. “Instead, he would be heeding our call and the call of Canadians to keep on delivering the help that people need.”

Trudeau’s political rebound since the 2019 election has been been intertwined closely with the pandemic, which ushered in an era of bigger government that dovetailed naturally with the Canadian leader’s own economic and political thinking.

His government is promising to maintain deficit spending in coming years to support the economic recovery and introduce new programs, including one that provides heavy subsidies for daycare spaces across the country.

To move beyond their minority, the Liberals will need to pick up seats in the French-speaking province of Quebec from the Bloc Quebecois and in British Columbia from the Conservatives. There are a small number of seats elsewhere that they could take, but margins to gain a majority are tight for Trudeau, barring an outright collapse of support for the Conservatives.

Trudeau may also fail to frame the election around pandemic management, as he’d like. Cost of living increases is the top issue voters care about most ahead of the election, according to a survey by Abacus Data for the Broadbent Institute, a think tank. Health care is at No. 2, while housing affordability is third.

“These results clearly indicate that most Canadians will react negatively to ideas that they feel will make their lives more expensive,” David Coletto, chief executive at Abacus, said in a statement on Friday.