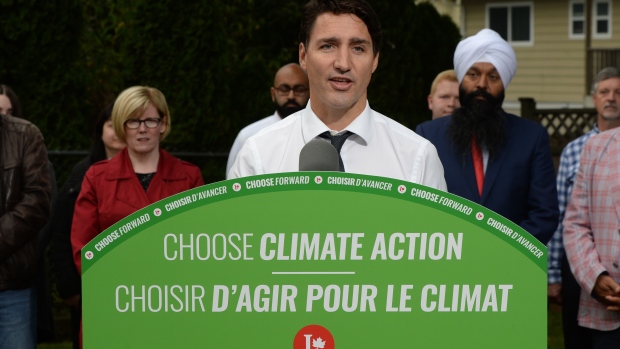 MONTREAL -- Justin Trudeau promised Friday that a re-elected Liberal government would use revenues from the Trans Mountain pipeline to pay for a $3-billion plan to use nature to combat climate change, which includes planting two billion trees over the next decade.

The promise is the latest plank in Trudeau's plan to protect the environment, which he unveiled in pieces at campaign stops over the past week while defending his government's controversial purchase of the pipeline.

The promise follows new research that suggests trees could play a huge role in reducing atmospheric carbon dioxide and only a few months after the federal government stepped in to save a tree-planting program from budget cuts in Ontario.

The Liberal leader made the pledge after meeting with 16-year-old Swedish environmental activist Greta Thunberg and before participating in a climate march in Montreal, one of several such marches across Canada on Friday.

The environment has taken on a significant role in this election, with Trudeau's chances at re-election at least partly resting on his ability to convince progressive voters that his party's plan is better than those of the NDP and Greens.

"Nature isn't just part of our identity as Canadians, it's also a part of the solution to climate change and it's a solution we can start using today," Trudeau said as his son Xavier and daughter Ella-Grace stood nearby with supporters and local Liberal candidates.

"Trees are remarkable. They pull carbon out of the atmosphere. They are renewable and they're sustainable and, eventually, they even recycle themselves. All we have to do is plant the first one."

While Trudeau did not lay out specific details, including exactly how much the tree-planting promise would cost, the Liberals say the promised trees are in addition to the roughly 600 million that are already planted across Canada each year.

That includes trees being planted through an Ontario program that the federal Liberal government saved when its funding was cut by Premier Doug Ford's government in April. The Liberals promised $15 million over four years to keep it going.

The role of trees in fighting climate change has been generally understood for some time. But a landmark study by Swiss researchers in June suggested planting trees could be the most effective and cost-efficient way to fight climate change because of their ability to capture and store carbon dioxide, particularly when they are young and growing.

The study, published in the journal Science, also found there is enough space worldwide to plant one trillion trees without affecting existing cities or farmland, and listed Canada among six nations with the space to handle a large share of such efforts.

Some communities have picked up on the importance of planting trees by issuing challenges, including one in Winnipeg where Mayor Brian Bowman called on residents to plant a million trees over the next 20 years.

Victoria last week promised to plant 5,000 trees by the end of 2020 as part of a United Nations challenge.

In addition to the promised trees, Trudeau said the overall $3-billion investment -- which the Liberals say will start to roll out in 2020-21 and be offset by forthcoming revenues from the Trans Mountain pipeline -- will be used to expand and diversify urban forests.

Funds will also be allocated to work to prevent infestations, such as the emerald ash borer, from devastating Canada's forests and regenerating tree cover in areas damaged by wildfires and other natural disasters.

The Liberal government bought the pipeline from Kinder Morgan last year for $4.5 billion following concerns over whether an expansion of the pipeline would move ahead. The Crown corporation running the pipeline reported revenues of $138 million last year.

The tree-planting plan alone will create around 3,500 seasonal jobs, Trudeau added, before taking aim at federal Conservative Leader Andrew Scheer and Ford, who has become a popular target for the Liberal leader during this election campaign.

"Doug Ford tried to axe tree-planting in Ontario, a shortsighted decision not just for our environment, but for the hundreds of seasonal jobs that it puts at risk," Trudeau said.

"Our government put up $15 million to keep that program going because we can't play politics with our kids' future."

The Liberal leader also attacked Scheer for being the only major-party leader not to participate in a climate march on Friday and accused the Conservatives of refusing to understand, let alone participate, in "the great fight of our time."

Yet even as he sought to bolster his environmental credentials and attack those of the Conservatives, Trudeau faced criticism over his own record.

"Trees won't hide the pipeline you bought," NDP Leader Jagmeet Singh tweeted in reference to the Liberal government's decision to purchase the Trans Mountain pipeline, which has been a major source of anger for environmentalists.

Thunberg also told reporters after meeting Trudeau that while she tries not to "focus so much on individuals," she had told the Liberal leader he was "obviously not doing enough" -- an assessment Trudeau said he agreed with.

"I agree with her entirely. We need to do more," he said. "And that's why the ambitious plans we've laid out all week that have been criticized by some as too ambitious, are not too ambitious -- are necessary."