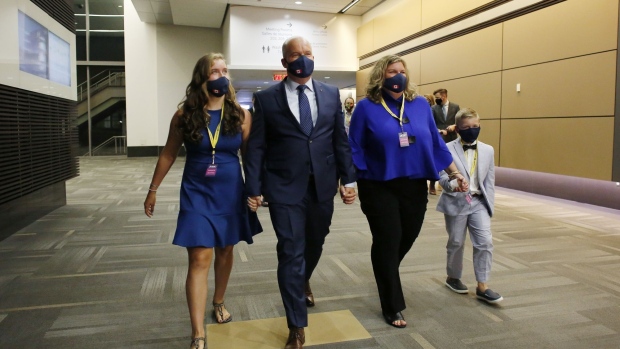 Erin O’Toole and his family arrive at a Conservative Party leadership rally in Ottawa on Aug. 23. Photographer David Kawai/Bloomberg , Bloomberg

(Bloomberg) -- Justin Trudeau’s main rival tested positive for coronavirus five days before the Canadian prime minister is scheduled to unveil a new agenda that could trigger an election.

Conservative Leader Erin O’Toole received the diagnosis late Friday, according to a statement from the party. A staff member he traveled with contracted Covid-19 earlier in the week.

The 47-year-old, who was elected as the country’s opposition leader last month, is “very relieved” that his wife and children tested negative for the virus, the party said. “Mr. O’Toole remains in self-isolation and is feeling well.”

Trudeau suspended parliament on Aug. 18 amid an ethics scandal and after appointing a new finance minister in the middle of Canada’s worst economic slump since the Great Depression. His Liberal government will set out a new agenda on Wednesday, which would need the support of at least one opposition party after losing a majority in elections almost a year ago.

The Liberals have 154 seats in the legislature, while the Conservatives hold 121. The Bloc Quebecois is in third place with 32 seats, the left-leaning New Democratic Party -- the most natural partner for Trudeau -- has 24, and the Green Party holds 3.

There are two independents and two vacancies -- including the seat former Finance Minister Bill Morneau abandoned after a public policy feud with the prime minister over the government’s pandemic response.