Justin Trudeau took fire from all sides in the only English-language leaders debate ahead of an Oct. 21 vote that polls suggest remains the Canadian prime minister’s to lose.

Monday night’s two-hour session in Gatineau, Quebec -- near Ottawa -- pitted leaders from six Canadian parties against each other, but with Trudeau drawing attacks from both his political left and the right. Topics discussed included pipelines, climate change, indigenous affairs, income inequality, government spending, immigration and affordability.

The leaders largely stuck to script, seeking to promote their own platforms and campaign narratives, with no clear knock-out punches that could break a logjam in the polls. That deadlock still gives the Liberals a lead in projected seats -- but without the majority in parliament the prime minister has held for the last four years.

“Mr. Trudeau you are a phony and you are a fraud and you do not deserve to govern this country,” Scheer said, right off the bat in his initial comments in the debate. 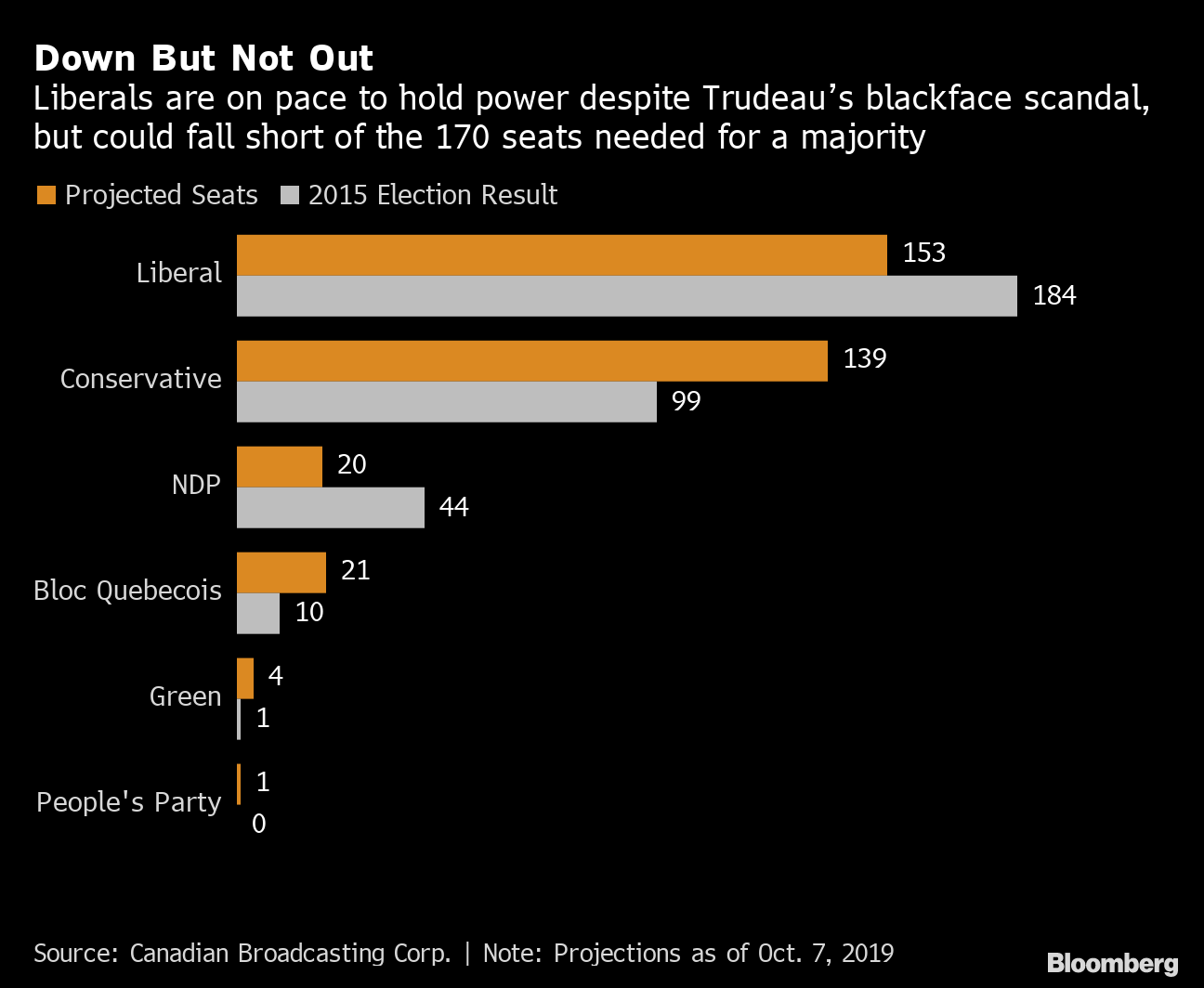 Scheer and Trudeau are running neck and neck in voting intentions, despite the Liberal campaign being jolted by the blackface controversy. Both have about 34 per cent support, according to aggregate polling averages compiled by the Canadian Broadcasting Corp.

A tie or even a small deficit in the popular vote favors the Liberals, because their support is more widespread across regions. The Conservatives have large leads in western Canada, where there are fewer districts to be won.

Also participating in the debate were Elizabeth May of the Green Party, Yves-Francois Blanchet of the separatist Bloc Quebecois, and Maxime Bernier of the People’s Party of Canada, which wants to reduce immigration.

Trudeau’s strategy was to highlight some of his successes as prime minister, like a sharp reduction in poverty, and position his party as the most pragmatic option that will seek to balance both the needs of the economy with other priorities such as the environment.

Another familiar narrative for Trudeau -- whose approval ratings were near record lows heading into the election -- was to repeatedly evoke the previous Conservative government of Stephen Harper, which he defeated in 2015, a mechanism he’s used throughout the campaign. He mentioned Harper’s name at least eight times in the debate.