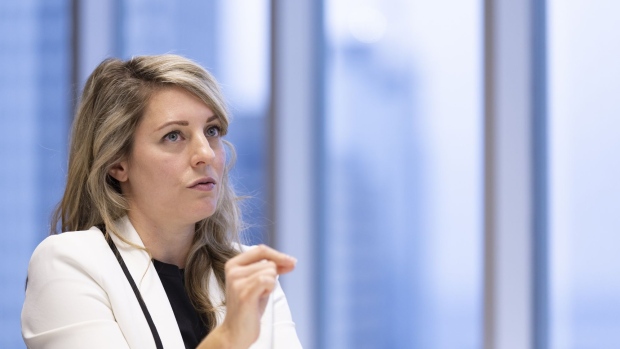 Melanie Joly speaks during an interview in Montreal on Nov. 25. , Bloomberg

(Bloomberg) -- Canada’s foreign minister said she’s hopeful national police and courts can soon move to seize Russian assets and sell them off to support Ukraine, despite the lack of action under a new law so far.

Prime Minister Justin Trudeau’s government enacted legislation allowing courts to order the forfeiture of assets seized under sanctions in June, promoting the effort as the first of its kind by a Group of Seven country.

But last week the government revealed it’s still attempting to put the law into practice, despite pledges to use it to help compensate victims of Russia’s war in Ukraine. The statement, provided in parliament to an opposition lawmaker’s question, said there is a “whole-of-government” effort underway to identify target assets and build evidence to support forfeiture orders.

Foreign Minister Melanie Joly narrowed down the problem to law enforcement capacity, and pointed to a recent boost in funding as a potential solution.

“It’s the security agencies that need to do the work because they have all the information and all the powers,” Joly said. “I think that there was a lack of resources.”

With more funding in place “for security agencies to have the right people to do that work, I just want that work to be done,” she said.

On Oct. 7, Joly announced C$76 million ($56.4 million) to fund a new dedicated bureau in her department for sanctions enforcement and additional support for the Royal Canadian Mounted Police. The aim is to “ensure we can move more quickly to freeze and seize sanctioned individuals’ assets.”

The extra funding isn’t just for Russian sanctions. It was announced alongside new Canadian sanctions on Iranian leaders and military officers involved in a crackdown against protests in the country. Canada has also sanctioned “political elites” in Haiti deemed to be providing “illicit financial and operational support to armed gangs.”

Joly acknowledged there are fewer Russian assets in Canada to be seized compared to the US and especially Europe. Still, the RCMP said in a Nov. 7 statement that C$122 million of Russians assets in Canada are currently frozen under the sanctions regime, and a further C$291 million in financial transactions have been blocked.

Despite the lack of forfeitures so far, Joly said she is focused on enforcement because “it’s one thing to announce sanctions, it’s another thing to be able to actually seize assets.”

--With assistance from Mathieu Dion.