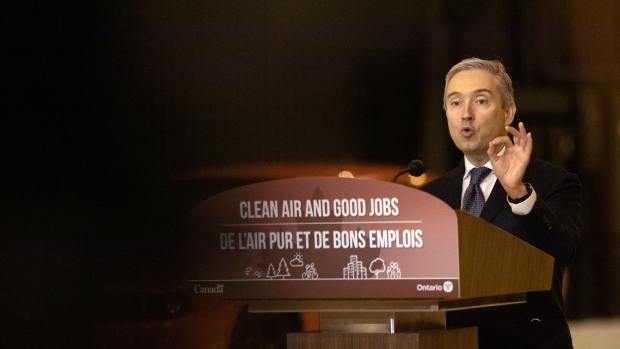 Francois-Philippe Champagne makes an electric-vehicle announcement in Windsor, Ontario on May 2, 2022. , Bloomberg

“It’s no longer why Canada,” Champagne said in an interview after his trip to Asia. “It’s how Canada, and what I’m focusing now is when.”

Though he declined to say if any agreements were reached in his meeting with Koda, the minister said “we had a very long, I would say very interesting conversation.”

The 52-year-old politician has been talking up Canada’s industrial prowess around the world since taking over the key ministry in January 2021. His previous posts in Prime Minister Justin Trudeau’s cabinet included both foreign affairs and trade.

Champagne said Canada’s talented workforce, thriving automotive ecosystem, abundance of critical minerals and renewable energy, and its access to the US market will “lead to the type of investments we’re looking for.”

“What I hear from original equipment and battery manufacturers is that the investment made both in Ontario and Quebec are very complementary,” Champagne said when asked about competition between Canada’s two biggest provinces in the EV supply chain.

All projects announced so far are backed by hundreds of millions in subsidies from both the federal and provincial governments.

Champagne said “speed and scale” are a big challenge for Canada in building out its EV battery ecosystem and suggested institutional investors could help accelerate the process. He cited a Brookfield Infrastructure Partners LP agreement to fund an Intel Corp. semiconductor facility in Arizona as a potential example to follow.

“That would be a way on one end to allow these facilities to be built faster and at the same time, to provide stable returns to these pension funds,” Champagne said. “It is basically a model where you build and lease it back to the manufacturers.”