How immigration may play a huge part in Canada's economic recovery

Only 17 per cent of respondents say the country should accept more immigrants in 2021 than it did last year, according to a Nanos Research Group poll conducted for Bloomberg News. That suggests most Canadians are less than enthusiastic about aggressive new targets announced last week. 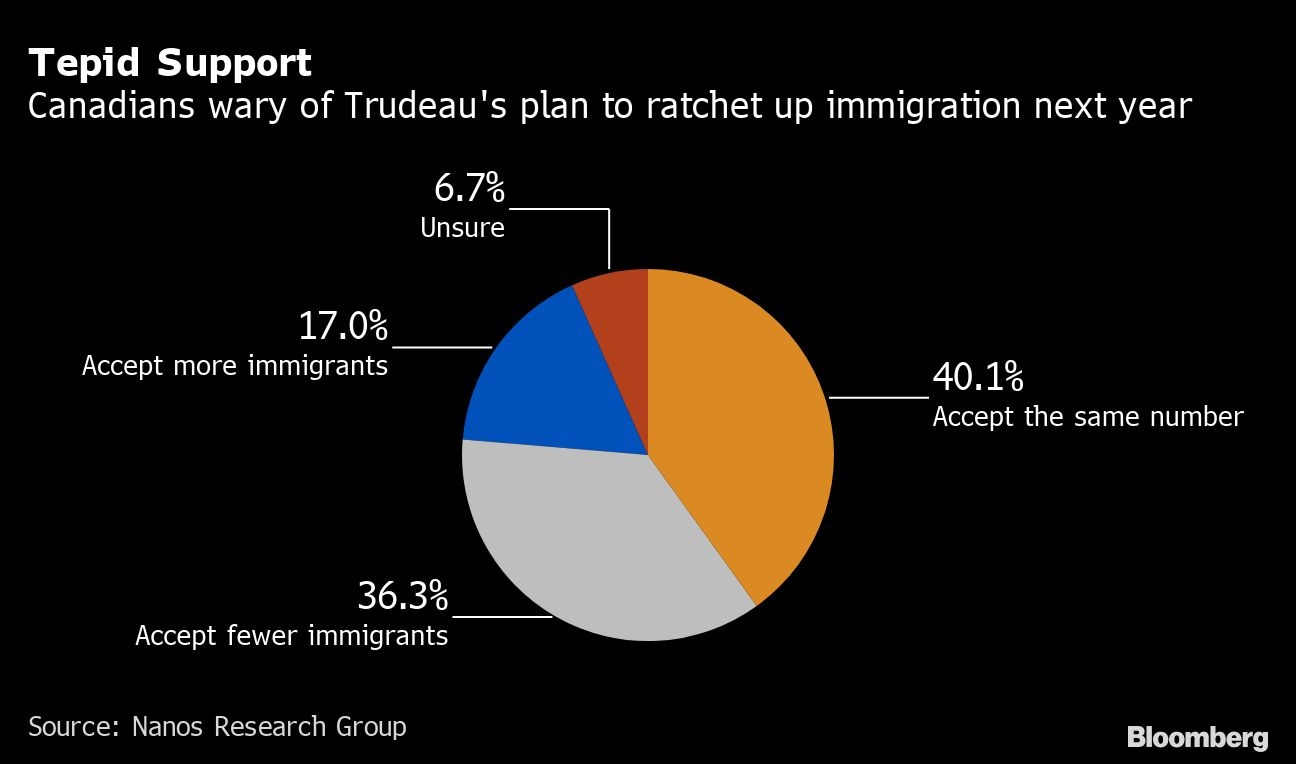 An open-door policy is a central tenet of the Liberal government’s long-term growth agenda. But with the economy recovering from the damage wrought by COVID-19, opposition parties are raising concern.

Closed borders and pandemic-related travel restrictions have slowed immigration this year and the country is on pace to meet only 60 per cent of its 2020 target of 341,000 permanent residents.

The survey results suggest Trudeau’s new targets don’t enjoy widespread support. Some 40 per cent of respondents say the government should reduce the number of new permanent residents accepted in 2021 below 340,000. And 36 per cent say they would like the country to maintain the same immigration levels as 2019.

Immigration Minister Marco Mendicino argues increasing the number of permanent residents will support the economy’s recovery from COVID-19 and help fill vacancies in essential work like healthcare. He is also hoping to draw on the more than 1 million foreign students, temporary workers and asylum seekers already in the country to achieve the increased targets.

“Canadians have a long, proud history of welcoming immigrants, because we know immigration makes our country stronger,” Mendicino said Friday by email, citing support for the higher targets from business and unions.

The flow of newcomers into Canada has been credited with helping counter aging demographics and supporting everything from the housing market to banking services. Before COVID-19, the government’s policies helped drive the fastest pace of population growth in three decades.

Dancho, the chief Conservative spokeswoman on the issue, said her party is pro-immigration but thinks the Liberal government’s announcement of new targets was “tone deaf” as “it did not acknowledge the feasibility concerns of bringing in this many new workers.”

The Nanos survey of 1,000 Canadians was conducted between Oct. 28 and Nov. 1 via telephone and online. The government announced the new targets Oct. 30.