Monthly inflation numbers are like overnight polls in the election: Norman Levine

Inflation has spiked in Canada and Justin Trudeau’s rivals hope the prime minister will pay the price.

Affordability has been one of the top issues ahead of the snap election Trudeau called for Sept. 20. The opposition Conservative Party is trying to rack up political points over rising costs for housing, cars and gasoline -- accusing the incumbent Liberal government of stoking inflation with its debt-financed spending.

Trudeau’s campaign won’t be helped by a 4.1 per cent inflation reading for August, the highest since 2003. The Tories, already running on a pledge to “stop Liberal inflation,” pounced on the figure shortly after it was reported Wednesday morning.

“The numbers released today make it clear that under Justin Trudeau, Canadians are experiencing an affordability crisis,” Conservative Leader Erin O’Toole said in a statement.

While cost-of-living issues are a regular of feature of Conservative election campaigns, it’s become a central part of the narrative this year as the party seeks to take advantage of polls showing the issue is on voters’ minds. In a survey by Abacus Data, 38 per cent said reducing their cost of living was a key factor impacting their vote -- making it the top issue by far.

It’s not just Trudeau who is vulnerable.

In the U.S., there’s a risk inflation concerns could derail President Joe Biden’s US$3.5 trillion long-term economic spending plan and factor into the 2022 midterm elections as an Republican attack. In Argentina, soaring inflation and rising poverty hurt the ruling coalition in midterm primaries. On the other hand, it’s been relatively absent from the debate in Germany’s election. 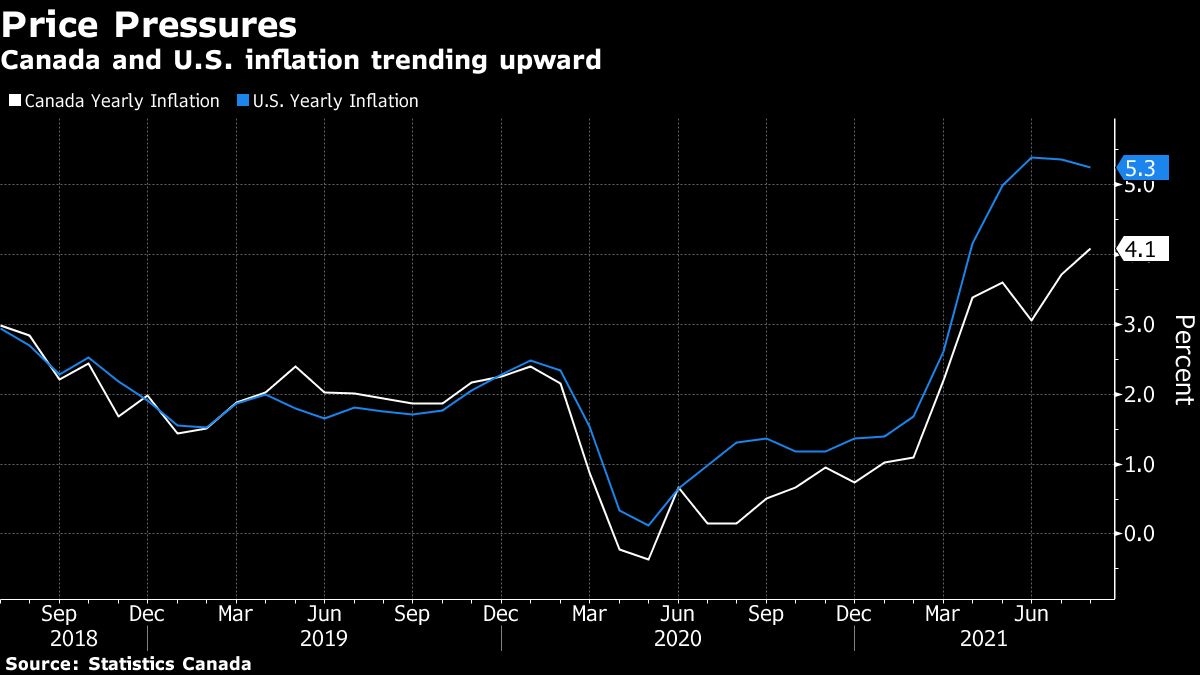 Inflation concerns in Canada are closely linked to housing affordability, which has deteriorated dramatically in recent years but particularly since the pandemic as prices surged. Buying a home has gotten harder and more expensive almost everywhere in the country, and is an election issue in its own right.

To be sure, much of the criticism is hype -- O’Toole’s party isn’t offering up many concrete solutions to ease price pressures. An obvious way to curtail inflation, for example, would be to curb government spending but the Conservative platform’s fiscal projections don’t differ that much from those put forward by the Liberals.

The inflation phenomenon is global, driven by supply bottlenecks and higher energy prices, coupled with deficit-fueled increases in demand. The boom in housing prices is also global, a function of ultralow interest rates.

Policy makers don’t appear too worried, either, arguing the pickup in inflation is transitory. But that remains open to debate.

“Everything is transitory, but are you talking minutes or decades?” said Doug Porter, chief economist at Bank of Montreal. “We think it lasts a bit longer and stays uncomfortable for longer” than consensus.

Yet rising costs still matter -- even if they turn out to be short-lived -- in the context of a tight election race.

“We recognize that families are concerned about affordability,” Trudeau said Wednesday when asked about the latest inflation reading at a campaign stop in Halifax, Nova Scotia. He added that his government would continue to support Canadians through the recovery from the COVID-19 crisis.

The cost of living continues to skyrocket under the Liberals. Something needs to change. In this election, vote Conservative. pic.twitter.com/pVorstKNZr

Inflation worries are showing up in weakening consumer sentiment, and may also be undermining faith in Trudeau’s economic management. More than half of Canadians surveyed by Nanos Research late last month said they weren’t confident his economic policy will lead to a post-pandemic recovery.

This is making Trudeau politically vulnerable. The governing Liberals have been polling in low 30 per cent-support levels for most of the campaign, well short of what would be required to gain majority control of the House of Commons.

Even if Trudeau staves off the criticism and wins the election, the emergence of inflation as a campaign issue could have long-lasting implications. For one, it has politicized a key policy decision due shortly after the election: the renewal of the central bank’s inflation targeting mandate.

The Bank of Canada targets 2 per cent inflation. The Conservatives have already said they would oppose changes to that. The Liberal position is still unknown, with Trudeau only saying early in the campaign that monetary policy wasn’t a priority for his government.