Prime Minister Justin Trudeau’s claims there isn’t a trade-off between Canada’s strict lockdowns and economic growth will be tested this week with the release of new output data.

Canada’s lagging performance is expected to continue into 2021. Economists see a stronger rebound in the U.S. this year because of its faster pace of COVID-19 vaccinations, looser virus-related curbs and President Joe Biden’s stimulus plan.

“It’s pretty obvious there is a trade-off,” Doug Porter, chief economist at Bank of Montreal, said in a phone interview.

The good news is investors and analysts don’t appear worried. The Canadian dollar is one of five major currencies that’s appreciated against the U.S. greenback this year. And the rise in government bond yields has been faster in Canada than the U.S., another sign of optimism about growth. 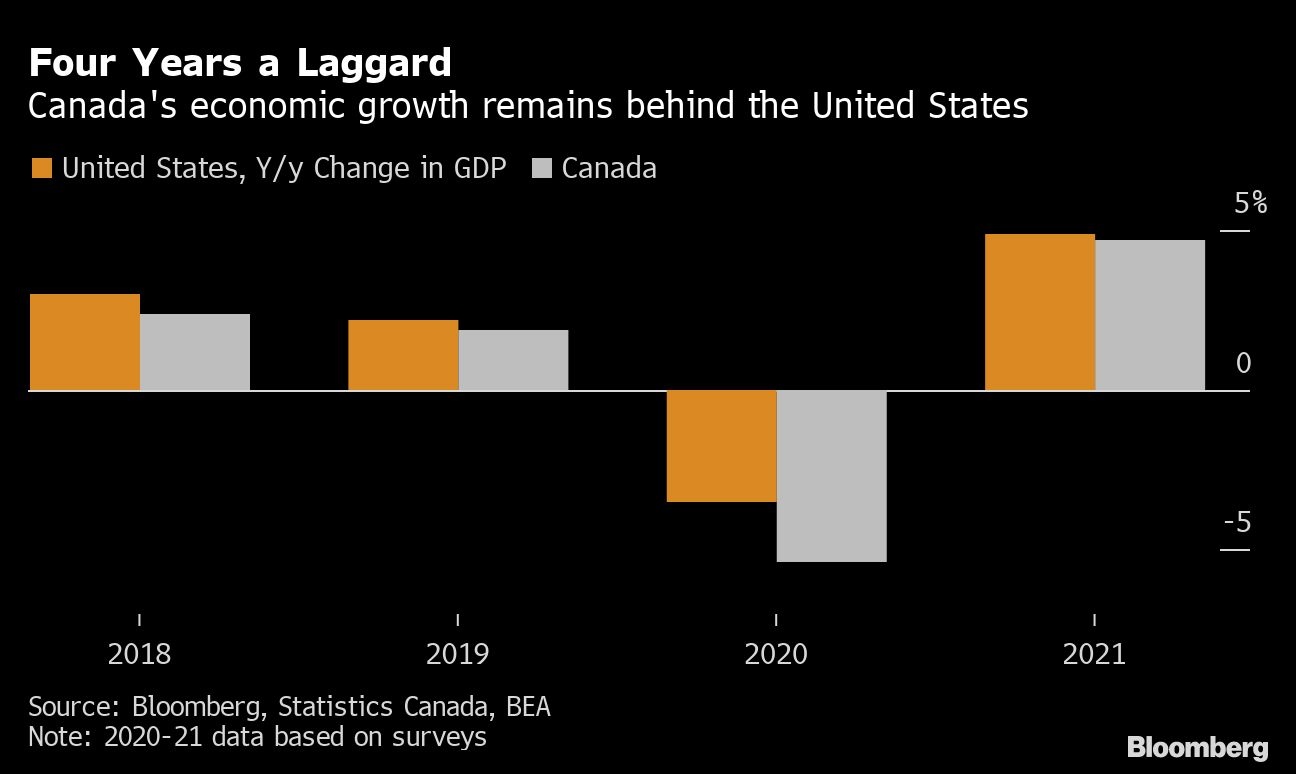 Economists anticipate growth of 4.7 per cent this year. That’s slower than the U.S., but also the fastest in two decades. GDP data due Tuesday from Statistics Canada are also likely to show more resilience to the latest wave of restrictions this winter, in part because of a booming housing market.

A rally in commodities, meanwhile, is another major tailwind for the resource-producing economy. The Bank of Canada’s index of commodity prices -- which tracks commodities produced in Canada and sold in world markets -- has more than doubled since its lows in April to the highest levels since 2014. Excluding energy, the index is at an all-time high.

The debate is switching toward upside risks to forecasts.

A massive accumulation of excess savings is one wild card. While other countries have seen a similar pickup in household savings during the pandemic, the trend has been more pronounced in Canada because of its stricter lockdowns and generous government aid programs. There were fewer opportunities to spend, even as Canadian incomes surged.

Many economists, including those at the Bank of Canada, have chosen to make conservative assumptions about how much of a rush Canadians will be in to draw down those extra savings.

Others, including Finance Minister Chrystia Freeland, are more bullish.

The reservoir of savings is so large, a bigger worry may be a rebound that is too strong, putting pressure on the central bank to raise interest rates.

While there’s debate over who will hike first -- the Federal Reserve or the Bank of Canada -- markets are pricing in more aggressive increases in the policy rate north of the border amid expectations Governor Tiff Macklem will have less tolerance for price pressures.

“There is a narrower inflation mandate for the Bank of Canada than the Fed,” Derek Holt, an economist at Bank of Nova Scotia, said by phone.

Add rising wealth from a surging housing market and it may not require much to trigger a post-pandemic boom. Which would be great news for a Trudeau government that may face an election soon, but poses another challenge.

Freeland wants to keep the spending taps open for the next few years on the grounds the economy will need continued support. That’s getting harder to argue.

“With a large stock of excess household savings waiting on the sidelines, plus already highly supportive policy, governments do not need to spend much more to propel a strong economic recovery in the year ahead,” Porter said in a report to investors Friday. “An effective vaccine rollout would be the single most important contributor to growth.”