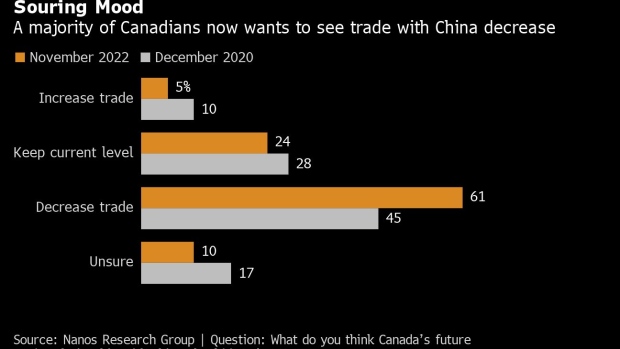 Though data released Tuesday show exports to China just reached a record monthly high of C$3.3 billion ($2.4 billion), 61% of respondents in a Nanos Research Group survey for Bloomberg News said Canada should reduce its trade with the Asian powerhouse. That’s a 16-point increase compared with December 2020, when the number was 45%.

The poll found 24% of Canadians believe trade with China should stay at the current level, and just 5% want to see an increase. Those numbers are relatively steady across gender, age and geography.

“Canadians have now woken up to the fact that China is not a reliable trading partner,” said Margaret McCuaig-Johnston, a China specialist at the University of Ottawa and a former senior public servant.

Describing the shift in sentiment as “really dramatic,” McCuaig-Johnston said public opinion has been shaped by China’s willingness to drop an “anvil” on Canadian trade products whenever it wants to make a political point. During the standoff over Canada’s arrest of a top Huawei Technologies Co. executive on a US extradition request, for example, Beijing found reasons to turn away shipments of canola, pork and other agricultural exports.

Trudeau’s government released a long-anticipated Indo-Pacific strategy last week, labeling China an “increasingly disruptive global power” and pledging to deepen its trade and military ties with other regional allies such as South Korea and Japan.

The document was released on the heels of a public confrontation between the Canadian leader and President Xi Jinping on the sidelines of the Group of 20 summit in Indonesia.

But despite a frosty diplomatic relationship — particularly during China’s three-year detention of two Canadians after the Huawei arrest — the Asian giant is still Canada’s second-largest trading partner after the US.

Merchandise trade with China totaled C$127.5 billion over the last 12 months through October, representing about 8.5% of trade flows, according to Statistics Canada. That compares with about 7% for all other major Indo-Pacific countries combined.

Despite the northern nation’s strategic shift, it’s still cooperating with China on issues like climate change. A United Nations conference on biodiversity that was supposed to be held in Kunming got underway this week in Montreal after Canada offered to act as co-host.

The Nanos poll, however, also found a drop in public confidence that the Canadian government is effectively managing its relationship with China. Just 20% of respondents said Ottawa is doing either a very good or good job at tending to Chinese ties, a drop of 12 points since 2019.

Nanos surveyed 1,025 Canadians by phone and online between Nov. 27 and 29. The poll is considered accurate with 3.1 percentage points, 19 times out of 20.