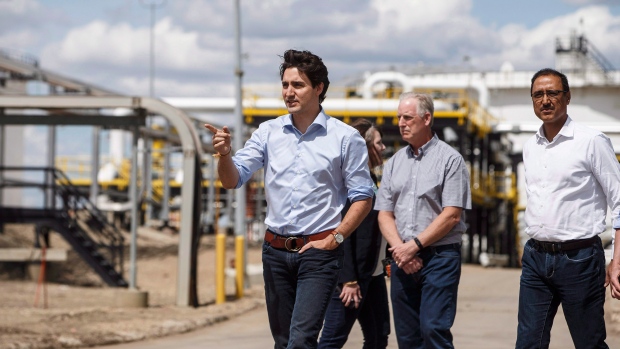 The request was made in a letter to the prime minister signed by 16 past and present members of the council and released to the public on Monday, in which signatories expressed "our immense disappointment" with the planned $4.5-billion pipeline purchase.

"The decision to buy the Trans Mountain pipeline project calls into question your commitment to young Canadians," the letter reads, adding that youth will be "disproportionately affected" by climate change.

Yet the letter has generated surprise and frustration inside the council, with other members saying they do not agree with its position and at least one expressing concern that it became public.

"I thought it was very partisan and that is not the role of the prime minister's youth council," said council member Sara Wheale, who has worked for more than seven years in Alberta's oil industry.

"We're supposed to be non-partisan. ... We haven't seen a letter go out like this and I don't think it was appropriate the way this was handled at all."

The Liberals' plan to purchase the Trans Mountain pipeline has been a political hot potato since it was announced in May amid fierce opposition from the B.C. government, environmental groups and Indigenous communities.

Trudeau spokeswoman Chantal Gagnon said Monday the prime minister "always appreciates input from the youth council" adding: "It is heartening to see young Canadians engage on political issues that affect them and become involved in the democratic process."

At the same time, she defended the government's decision to purchase the Trans Mountain pipeline while noting that it was investing more to protect marine safety.

The prime minister sat down in June to talk about the Trans Mountain purchase with the youth council, which was established in 2016 as a non-partisan advisory board comprising up to 30 young Canadians between the ages of 16 and 24.

Nmesoma Nweze, a neuroscience and psychology student at the University of Toronto and council alumna, said some members were disappointed by the lack of consultation before the decision given that Trudeau's meeting came after the deal had already been announced.

That is when she started to draft the letter, which says many young Canadians supported Trudeau during the 2015 federal election because of his promises on reconciliation and climate leadership, and that he subsequently promised to listen to -- and honour -- the concerns of young people.

The letter specifically asks Trudeau to: protect the environment and respect Indigenous rights by cancelling the purchase, condemn calls to crackdown on peaceful protests against the pipeline and organize roundtable discussions with youth representatives.

Nweze defended the decision to release the letter, saying the council wants to start doing more outreach and "we know we're not the only young people who feel this way."

Fellow alumni Chris Zhou acknowledged having been surprised when he saw that the letter had been distributed to the media.

"When we send letters to Trudeau, those tend to not be released to the public because we do want to retain a certain relationship with the prime minister in which we can both be candid and genuine with each other," Zhou said. "This letter is not the case."

Zhou nonetheless said that he wasn't opposed to releasing the letter.

But Wheale took issue with some members using their roles on the advisory council to publicly advance their positions on such a politically sensitive issue, and worried about the long-term impacts for the board as well as her own career.

"And there are other people on the youth council, either alumni or current members, who work in the oil and gas industry as well. And it's very concerning as to what sort of impact this is going to have on our careers."

CORRECTION: The Canadian Press incorrectly paraphrased Chris Zhou, a former member of the Prime Minister's youth council. The original story said he was surprised that the letter to the prime minister about the government's involvement in Kinder Morgan was released to the public. In fact, Zhou was surprised the letter was sent to media.