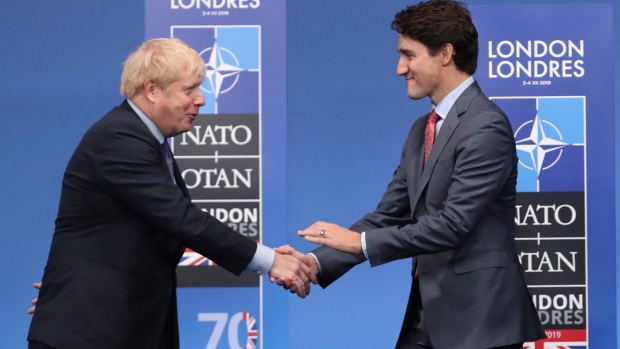 OTTAWA -- Prime Minister Justin Trudeau says he expects Canada can make a new trade deal with the U.K. before the calendar hit 2021.

Speaking at a digital event hosted by the Financial Times, Trudeau said a deal should be relatively straightforward to manage even as the U.K. lurches toward its official exit from the European Union.

Until Dec. 31, Britain remains a member of the EU, and is still bound by the continent's sweeping free-trade deal with Canada on goods and services, known as the Comprehensive Economic and Trade Agreement, or CETA.

Trudeau said he and British Prime Minister Boris Johnson believe the two countries are ready to have a new deal done before Jan. 1, 2021.

The two spoke earlier this week.

The prime minister said the greatest challenge is "bandwidth" within the British government, which started the year working not only on a trade agreement with the EU, but also agreements with the United States, Australia, Japan and New Zealand.

Trudeau noted that Canada renegotiated the North American free trade deal, signed a trade pact with Pacific Rim countries, and negotiated the Canada-EU trade agreement over the past several years.

"So there is an issue of not really having the bandwidth within government to move forward on this."

He added the British government wants to show that it can negotiate free trade deals and calls Canada's "a really easy one" to move on. He noted that parts of the trade deal with Europe could just be rolled into a new deal with the U.K. once it is no longer part of the European bloc.

"I'm very hopeful that it's going to get done, but that really is up to the U.K. government because we're there for it. I just hope they can come around to it."