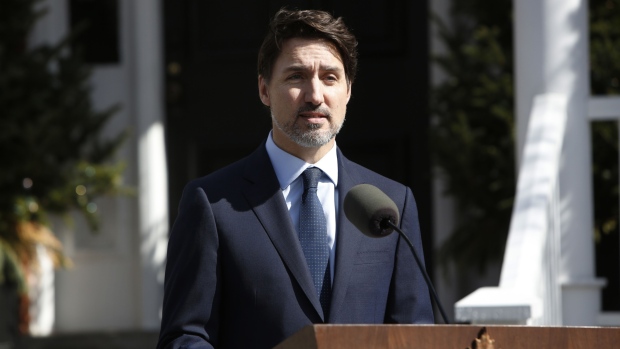 Justin Trudeau, Canada's prime minister, speaks to members of the media outside of his residence at Rideau Cottage in Ottawa, Ontario, Canada on Friday, March 13, 2020. Trudeau said Canada will introduce a "significant" fiscal stimulus package, as part of a coordinated effort with other Group of Seven countries to counter the virus-driven global economic slowdown and calm markets. , David Kawai/Bloomberg

Canadian Prime Minister Justin Trudeau said new travel restrictions are possible -- including shutting the country’s borders -- as Canada ramps up its response to the coronavirus pandemic.

“We have taken some very strong measures and we are not taking anything off the table,” Trudeau said today in a television interview on CTV’s Question Period. “We are looking daily at next steps that we might take or we should take, and those conversations continue.”

Trudeau, who was speaking from self-isolation outside his residence in Ottawa, was responding to a question on travel restrictions and closing borders on the Sunday news program. His wife, Sophie Gregoire Trudeau, tested positive for COVID-19.

The government has reduced the number of airports accepting overseas travelers across the country. But Canada continues to accept flights from Europe, the U.K. and Ireland, days after the U.S. announced new travel restrictions from the region.

“The shift in posture from the United States of course gives us significant things to think about and we will be discussing it later today among other measures at our cabinet meeting,” he said. “We are considering everything.”

Trudeau said he has “absolutely no symptoms” and their kids are also symptom-free. Canada has seen coronavirus cases accelerate in the past week, with the number of confirmed infections at 249 spread across nine provinces, with the majority in Ontario and British Columbia.

“I think there’s no question that there is going to be a significant global impact because of coronavirus,” he said. “You just look at what’s happening around the world and you know there’s going to be real challenges in the coming weeks and perhaps months.”

The Canadian government’s focus will be making sure Canadians can “come out the other side” with support, Trudeau said, adding that there will be “significantly more” fiscal announcements to make involving direct support for families and workers.

“We can create supports so that once this time of stress, of difficulty -- whether it be a few weeks or a few months -- Canadians and the Canadian economy will bounce back,” he said. “That is our focus.”

Trudeau also urged Canadians to not panic and “be reasonable” while shopping and not take more supplies than needed, referring to issues of hoarding that have been surfacing across the the country.

“Supply chains have not been disrupted,” Trudeau said. “Groceries are still coming up from the United States, from elsewhere and will for the foreseeable future.”