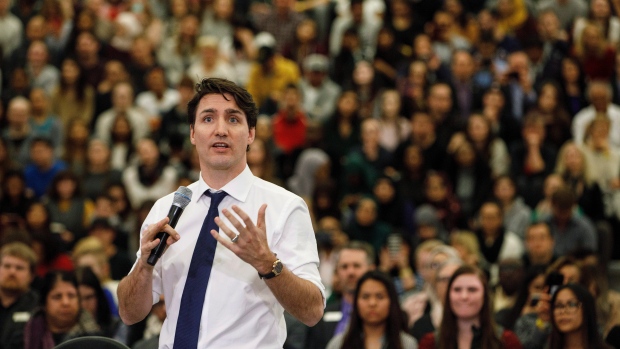 Prime Minister Justin Trudeau took the rare step of sending four cabinet members to Canada’s Senate, seeking to expedite the passage of a bill allowing recreational marijuana to be legalized later this year.

In a hearing on the subject, the senators didn’t make any clear commitment to passing the legislation quickly, suggesting there could be a delay to the Liberal government’s initial July target date, though Trudeau has since said they’re aiming for summer. Conservative lawmakers including Larry Smith questioned the ministers on outstanding issues such as roadside testing by police, a low minimum age of use and public campaigns to deter unhealthy consumption.

“Conservative senators won’t proceed in an obstructionist manner,” Smith said Tuesday in Ottawa. “We will give a voice to those in the Canadian public who have significant policy concerns” about the government’s plan.

Trudeau is aiming to make Canada the first Group of Seven nation to legalize the drug, fulfilling a 2015 election pledge, with the stated goal of squeezing out criminal production and curbing use by young people. While the Senate has rarely killed proposed laws sent from the House of Commons, the increasing prospect of a delay may affect marijuana producers, whose shares have fluctuated recently as investors reassess the market.

“We are confident that we are on track” to develop a legalized market, Justice Minister Jody Wilson-Raybould said. “I am confident that we will be in a place for the legalization of cannabis, July of 2018, and that a responsible process for implementation of the act will continue thereafter.”

Public Safety Minister Ralph Goodale said criminal gangs rake in $7 billion a year from illicit sales and police spend billions more on drug enforcement. International shipments will still be illegal and “we have been making sure the U.S. understands our approach,” Goodale said.

Companies and local governments that are developing rules for retail sales of the drug probably need eight to 12 weeks after any legislation passes to get ready through steps such as shipping out the product, Health Minister Ginette Petitpas Taylor said.

The government has been working for about a year to ensure an “orderly and responsible transition,” she said. “The passing of Bill C-45 will be a milestone in Canadian history.”