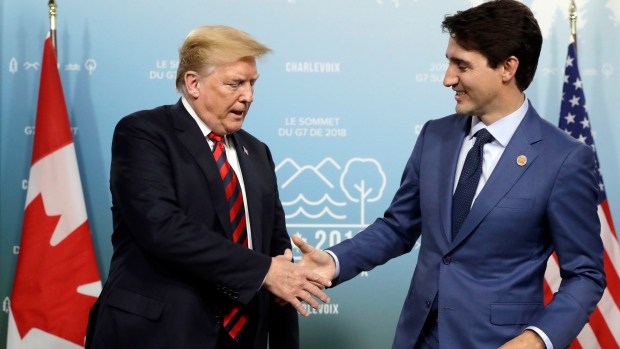 Canadians are backing Justin Trudeau in his trade spat with Donald Trump, saying the prime minister is the best party leader to deal with the White House.

In Nanos Research polling conducted for Bloomberg News as Canada finalized retaliatory tariffs against its biggest trading partner, 41 per cent of respondents said Trudeau could best manage the relationship with the U.S. president, while 20 per cent said Conservative Leader Andrew Scheer would be best-suited.

Trudeau’s support was higher among women, among those aged 55 and up, and regionally strongest in vote-rich Ontario -- a populous auto manufacturing heartland on the front lines of the tariff fight. The polling results are a vote of confidence for Trudeau, with a key caveat: one third of respondents said no party leader was best suited to deal with Trump, or that they weren’t sure.

“That probably speaks to the level of anxiety and uncertainty there,” pollster Nik Nanos said in an interview. “We don’t know how our relationship is going to pan out, because of a number of issues, ranging from tariff aggravations to personal interactions between the prime minister and the president.”

Nanos added: “It shouldn’t be a surprise that the PM of the day has an advantage.”

Trudeau led in most subgroups of the poll except the energy-rich, typically conservative Prairies, where 35.6 per cent said Scheer was the best fit, versus 26.7 per cent for the Liberal prime minister. Trudeau led in all other regions with the support of 48.5 per cent in Ontario and 43.7 per cent in Quebec, the two most populous provinces.

Canadian politics is typically a three-way race between the centrist Liberals, the right-leaning Conservatives and the left-leaning New Democratic Party, led by Jagmeet Singh. A former provincial lawmaker, Singh was elected federal leader last year but still doesn’t have a seat in the Ottawa legislature. The Liberals and Conservatives are running neck-and-neck heading into next year’s election campaign.

The poll shows only a two-way race when it comes to dealing with Trump. Just over 1 per cent of respondents said Singh would be best-suited for managing the relationship with the U.S. president, while Green Party Leader Elizabeth May -- her party’s only federal lawmaker -- received the support of nearly 3 per cent of those polled.

The poll was based on telephone and online responses from 1,000 Canadian adults, and was conducted from June 26 to 28. Canada finalized its retaliatory tariffs on June 29. The results are considered accurate within 3.1 percentage points, 19 times out of 20, with a larger margin of error for regional breakdowns or other subgroup results.