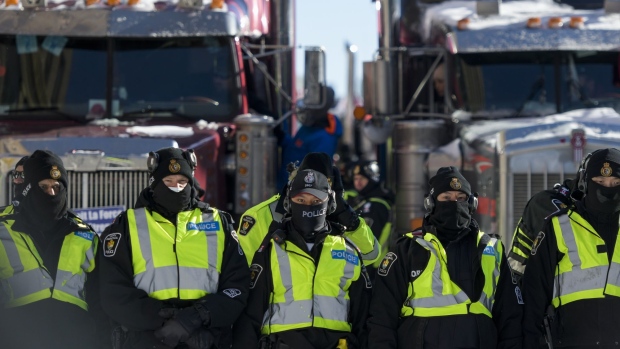 A protester poses for photos in front of one of the scores of semitrailers parked along the main avenue in front of Parliament Hill in Ottawa on Jan. 28, 2022 , Bloomberg

(Bloomberg) -- Prime Minister Justin Trudeau defended his decision to invoke emergency powers to quell a trucker-convoy protest in February, arguing during public testimony the move was aimed at staving off the threat of violence.

Speaking on Friday at a televised public inquiry into the government’s decision, Trudeau cited the “weaponization” of vehicles by protesters, and what he said was the use of children as human shields. He also said weapons were found at one of the sites, and there were people in the convoy promoting ideologically motivated extremism.

The prime minister is the final witness in the six-week hearing that’s seen almost every senior federal government official appear, along with police officers, mayors and the convoy organizers. The inquiry was mandated by the prime minister’s emergency edict itself.

Hundreds of semi-trucks and other vehicles arrived in Ottawa on the last weekend in January to protest vaccine mandates and other public health restrictions enacted during the Covid-19 pandemic. The inquiry has heard Ottawa police expected the trucks to leave after the weekend, but instead the protesters dug in and raised millions of dollars -- some in Bitcoin -- through online fundraising platforms including GiveSendGo.

The protests soon spread to other locations. One offshoot shut down the Ambassador Bridge from Windsor, Ontario into Detroit, a critical trade link for the North American automotive industry. Another in Alberta blocked a US border crossing used primarily by the agriculture and other commodities sectors.

Invoking the Emergencies Act on Feb. 14 gave Trudeau’s government the power to order banks to freeze the accounts of people and companies participating in the protests, and to compel towing companies to help clear out the blockades.

Trudeau said on Friday that there was a consensus in his cabinet and within the public service to invoke the act.

The prime minister denied the move was an overreach of executive powers, citing how parliament actually backed his decision in a subsequent vote. Trudeau also said that he isn’t worried the invocation is creating a low bar for future governments to use emergency powers, citing checks and balances in the system including the requirement for public inquiries.

“I am absolutely absolutely serene and confident that I made the right choice,” he said.

Trudeau is the only prime minister to use the emergency legislation since its creation in 1988. The closest parallel in modern Canadian history was the so-called October Crisis of 1970, when his father Pierre Trudeau effectively declared martial law in response to kidnappings by Quebec separatists.

The commission has heard conflicting testimony about whether police believed the emergency powers were necessary to clear the streets. But it has also heard that Trudeau’s national security adviser Jody Thomas, the head of Canada’s intelligence agency David Vigneault and other top government officials advised him to invoke the legislation.

Finance Minister Chrystia Freeland and Michael Sabia -- a former pension, telecommunications and rail executive who is the top civil servant in her department -- both took the stand recently. They testified that the border blockades risked severely harming Canada’s reputation as a reliable trade partner at a time when the country was already battling US protectionism in the auto sector.

Freeland testified Thursday about her conversations with US officials, including Brian Deese, the head of the National Economic Council, and said she strongly felt Canada was facing “economic jeopardy” if the border wasn’t reopened quickly.

“I could see, really for the first time ever, the Americans having this amber light flashing in Canada -- and this amber light said to them, you know what, the Canadian supply chain could be a vulnerability,” Freeland told the inquiry.

Both Freeland and Sabia said they were focused on finding tools that could be enacted immediately to end the blockades, and that’s what led them to believe the emergency powers were necessary.

(Updates with Trudeau comments throughout)