Justin Trudeau is telling the world that he’s optimistic about a positive outcome from the ongoing NAFTA negotiations, but a former deputy prime minister is warning that he should be planning for the worst.

The Prime Minister told Bloomberg in an interview on Wednesday that he is optimistic Canada wil get "a win-win-win” deal on NAFTA, but John Manley – who served as deputy PM under Jean Chretien - said Ottawa should be showing ‘real concern.’

“You would expect the prime Minister to be optimistic about the outcome of the NAFTA negotiations. I used to be there. That’s what ministers have to do,” Manley, now CEO of the Business Council of Canada told BNN in an interview on Thursday.

“Behind the closed doors, the Prime Minister and his cabinet need to be showing some real concern that they understand... They get what drives investment and jobs and growth in the economy and they’re prepared to do what they need to do to ensure that Canada stays great, if you want to put it that way."

Manley said that the U.S. tax reform plan, passed by Washington in December is key factor that will drive investment away from Canada and into the States.

“[The U.S. tax reform bill] basically eliminated the corporate income tax differential between Canada and the U.S. that was always in our favour,” Manley said, “but also provided more tax advantages for investment in the U.S. than we have in Canada. That should be of concern to us.” 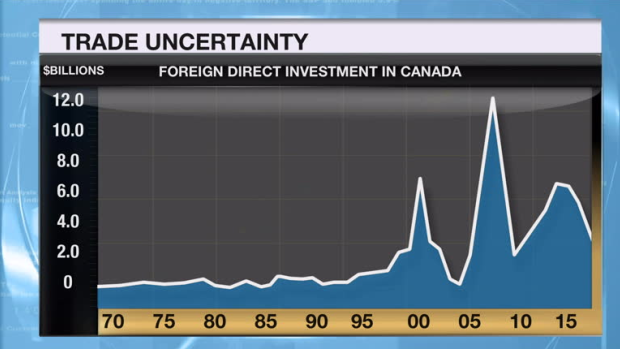 Manley also said that the Trudeau government should be basing their economic outlook on a more comprehensive picture of the country’s current investment landscape and should factor in the hit the country suffered due to lower oil prices.

“We’ve been seeing the trend down in investment in Canada ever since the crash of oil prices a few years ago,” Manley said. “So, I don’t think that they can afford to look at the snapshot of today’s economy, which is what they’ve tended to do – which actually looks quite good – and say: ‘We can project from here on out into the future and everything’s going to be rosy.'”

“I think they’ve got to look at some of the underlying factors before it becomes a problem.”