Prime Minister Justin Trudeau faces a tough fight to eke out even a narrow victory in the snap election he called hoping to strengthen his grip on power in Canada.

With advance ballots beginning Friday, public opinion polls show Trudeau’s party stuck in a statistical tie with Conservatives led by challenger Erin O’Toole. The opposition Tories have 33 per cent support compared with 31 per cent for Trudeau’s Liberals and 19 per cent for the left-leaning New Democratic Party, according to the latest Nanos Research Group survey.

If those numbers hold through the last 10 days of the campaign, Canada is facing another minority parliament in which the government needs the support of another party to pass legislation. The Liberals could still win the most seats while losing the popular vote, which is what happened in the 2019 election.

The Nanos survey, conducted for CTV News and the Globe and Mail newspaper, is based on a three-day rolling average and has a margin of error of 2.8 percentage points.

On Thursday night, Trudeau was attacked from all sides in a combative televised debate. The most decisive blow was landed by O’Toole, who simultaneously criticized the prime minister’s record on fighting climate change and his motivation for triggering the Sept. 20 vote.

“He has great ambition,” the Conservative leader said. “Part of the reason we are in an election in a pandemic is his ambition. He doesn’t have achievement.” 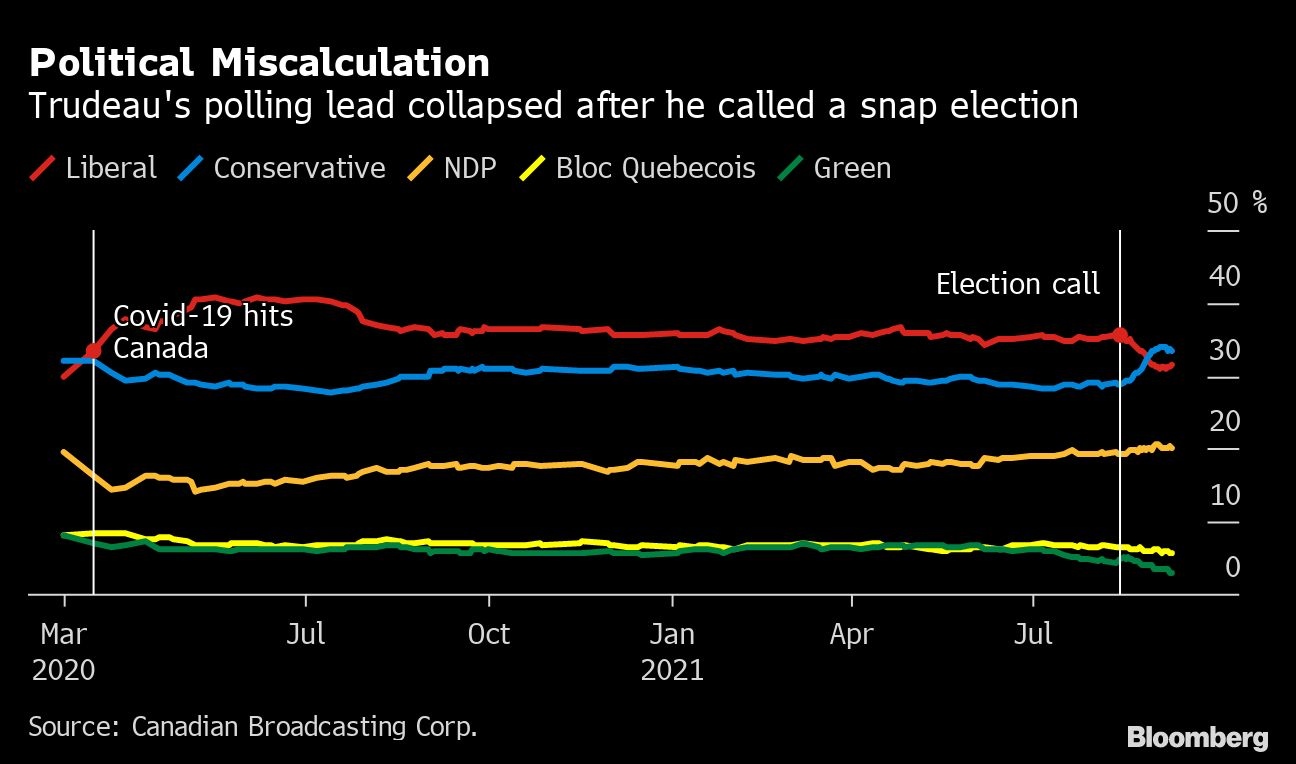 O’Toole also accused Trudeau of mishandling relations with China, which locked up two Canadians in the days that followed the 2018 arrest of a top Huawei Technologies Co. executive in Vancouver on a U.S. extradition request.

After the Conservative leader said the prime minister had failed the two men, Trudeau shot back. “You do not simply lob tomatoes across the Pacific,” the prime minister said. “You need to engage in a sophisticated way with our allies.”

Earlier Thursday, the Conservatives won what could be decisive support from the popular premier of Quebec, the second most populous province. “For the Quebec nation, Mr. O’Toole’s approach is a good one,” Premier Francois Legault said, warning that victory for any other party could prove “dangerous” for provincial autonomy.

Both O’Toole and Trudeau begin the home stretch of their campaigns in southern Ontario on Friday. The Conservative leader will visit two Toronto suburbs, while the prime minister makes a return stop in Hamilton, about 40 miles southwest of Canada’s biggest city.