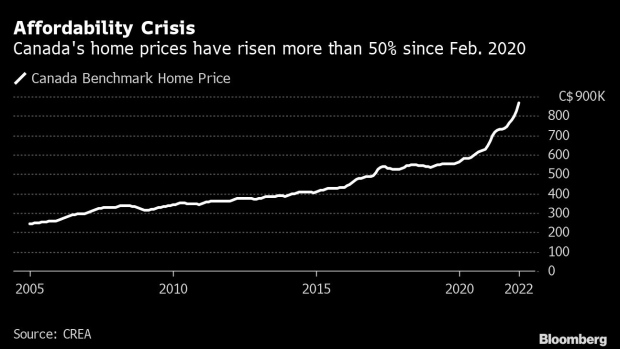 (Bloomberg) -- Canadian Prime Minister Justin Trudeau is attempting to rein in one of the world’s most expensive housing markets.

In its budget on Thursday, his government unveiled a raft of policies designed to make housing more affordable. They include moves to curb demand through taxes on speculators, a freeze on home purchases by foreigners and a ban on blind bidding wars. But Trudeau’s also pursuing an ambitious plan to double the pace of new home construction over the next decade.

“We will do everything we can to make the market fairer for Canadians,” Finance Minister Chrystia Freeland said in the prepared text of her speech to parliament. “This budget represents perhaps the most ambitious plan that Canada has ever had to solve that fundamental problem.”

The new measures come after a 50% rise in home prices over the last two years that has made housing affordability a top political issue in Canada. First time buyers are increasingly priced out of the market and the cost of rent is climbing.

While the record low mortgage rates and demand for larger living spaces brought by the pandemic have caused house prices to skyrocket around the world, in Canada a preexisting shortage of homes has made the situation even more dire. Since the start of the pandemic, Canada has posted the steepest run-up in home prices among 25 nations tracked in the Federal Reserve Bank of Dallas’s international database.

But Trudeau’s efforts also come at a time when Canada’s housing market is looking more vulnerable than it has in years. With inflation at a 30-year high, the central bank is expected to embark on one of the most aggressive efforts to raise borrowing costs in the institution’s history, putting even more pressure on the market just as Trudeau’s plan will start to bite.

The policies that may be implemented fastest are those targeting foreign buyers and speculators.

Trudeau plans to crack down on house flippers with new rules going into effect Jan. 1 that would tax profits from properties sold within 12 months of a purchase as business income, a potentially steeper tax rate. And because the trading of contracts for pre-construction housing units was identified as another avenue for speculation, the budget says those transactions will be subject to sales taxes beginning next month.

Trudeau’s government is also targeting foreign investors in particular, proposing a two-year ban on foreign commercial enterprises and people who are not citizens or permanent residents from acquiring homes in Canada for two years. The budget didn’t specify when the ban would come into effect.

But while these measures can be instituted quickly, there’s some debate about how much impact they will have. Investors have come to account for about a fifth of home purchases nationwide over the course of the pandemic, but many of these are likely buying homes to rent them out, rather than flip them. The government projects its anti-flipping tax will only bring in about C$15 million ($11.9 million) annually once it’s fully implemented next year.

And it’s unclear how much of a role foreign investors play in exacerbating Canada’s housing affordability crisis. Non-residents own no more than 5% of properties in any major market, and the price surge of the past two years has come as borders were largely sealed off by the pandemic. But when taxes specifically targeting foreign home buyers and owners were implemented locally in Toronto and Vancouver in recent years, they did result in price declines, though these measures came as the Bank of Canada was raising interest rates, as it’s expected to do again for the balance of this year.

Longer term, the reform in Trudeau’s budget that Canadians may feel most directly is the so-called “home buyers’ bill of rights.” Among other things, it seeks a ban on blind bidding, where prospective buyers don’t know how much others are offering and are incentivized to bid as much as they can.

The practice has been blamed for accelerating Canada’s house price inflation as stories of bidding wars and sales for hundreds of thousands of dollars over asking became increasingly common over the last two years. The government says it will consult with other levels of government over the next year to implement this goal.

But Trudeau’s most ambitious proposal could be the one which takes the longest to hit the market: An attempt to address the housing shortage the government says is at the heart of Canada’s affordability crisis.

To do this, Trudeau wants to double the number of new homes Canada builds each year to 400,000 units. But because local governments control the levers that regulate construction, like zoning and permitting rules, Trudeau’s plan is to use federal funds to incentivize municipalities to speed the process up.

The chief tool will be a new C$4 billion fund dedicated to housing, which could be used for things like investments in a local government’s planning or permitting process, or just to provide a “per-door incentive” for local politicians to overcome the “not-in-my-backyard” opposition that often sinks new housing developments.

“Canada does not have enough homes. We need more of them, fast,” Freeland said in the text of her speech. “We will invest in building more homes and in bringing down the barriers that keep them from being built.”