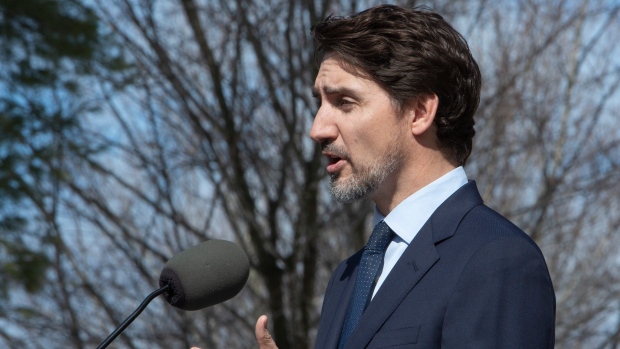 Prime Minister Justin Trudeau is due to address the nation again today after a weekend that saw health officials strengthen their tone on COVID-19 as provinces took more drastic measures to stem the virus's spread.

News of Trudeau's press conference, which is scheduled for 1 p.m., came hours after cabinet ministers left a meeting on Sunday promising big action. Some of those same ministers are set to speak to reporters after Trudeau's address.

“I think the most important thing that Canadians want to know right now is how we can keep them safe, and that has been our main priority as a government, and that's why starting tomorrow you will be hearing, also, some important news,” Tourism Minister Melanie Joly told reporters Sunday.

“Starting tomorrow, you will be hearing the decisions that we just took.”

Joly didn't explain why they were waiting to make the announcement.

“Our window to flatten the curve of the epidemic is narrow,” Dr. Theresa Tam said at a news conference. “We all need to act now. COVID-19 is a serious public health threat.”

If people don't stay home in an effort to “social distance,” the virus will spread so quickly that too many people will need urgent medical care at once, she said.

Over the weekend, the number of confirmed cases in Canada climbed from 197 to 341.

But in Quebec, the premier took a more hard-line approach.

“We have to limit outings,” Francois Legault said at a briefing. “We should go out only to work, buy bread, go to the pharmacy, get health care, take a walk or go help people age 70 and up.”

Meanwhile, Alberta's chief medical officer of health said there was evidence of community transmission in the province.

“Until now, all cases in Alberta had been travel-related or close contact with a returning traveller,” Dr. Deena Hinshaw said. “These two cases mean that there are other cases in the community that we haven not identified, increasing the likelihood that Albertans may be exposed within their communities.”

She said the development changes the landscape and led the province to cancel classes for students in kindergarten through Grade 12 and shutter licensed daycares.

Even the judicial system was making adjustments, with the Ontario Superior Court of Justice announcing it would suspend operations starting on Tuesday, postponing all trials except the most urgent. It said judges would decide today whether to proceed with jury trials.

The growing number of cases has prompted the cancellation of large-scale events, multimillion-dollar economic stimulus packages from governments, and the suspension of the Parliament until April 20.