Business groups are calling on the Canadian and U.S. governments to relax border restrictions for vaccinated travelers this month, increasing pressure on Justin Trudeau to act swiftly.

Chambers of commerce on both sides of the border, along with other groups, want travelers who’ve been fully inoculated against COVID-19 to be able to cross the border without having to show a negative test or undergo a quarantine, a letter released Tuesday said. The business groups say the changes should take effect on June 22, the day after the renewal deadline for a pact that restricts travel between the two countries. The letter was reported first by Bloomberg News. 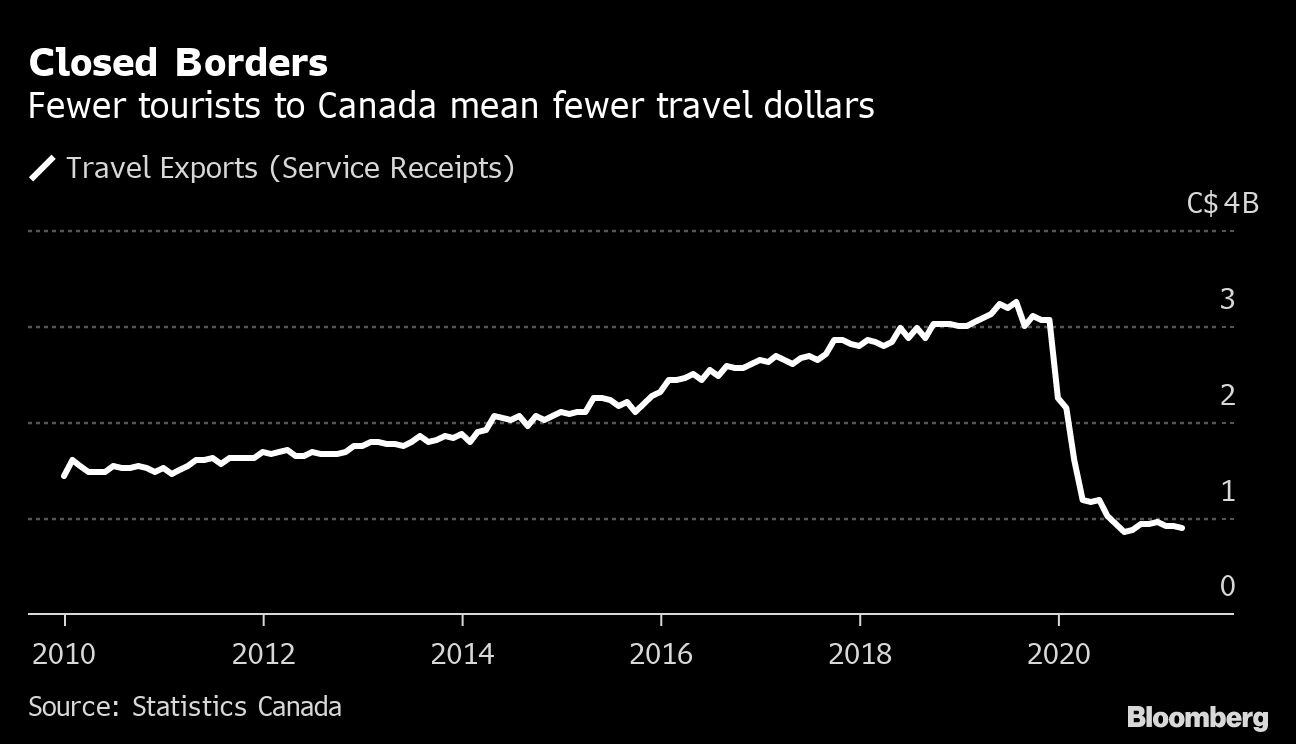 Easing restrictions this month “to take account of rising vaccination levels would sustain jobs, boost business confidence and allow more families to reunite,” the groups said. “It would help facilitate a safe and gradual return to a more normal life.”

Airline stocks gained on news of Trudeau’s plans. Air Canada and Transat AT Inc. rose as much as 5.4 per cent and 5.7 per cent, respectively, in Tuesday trading.

The prime minister acknowledged the mounting pressure at an Ottawa news conference. “We all understand that we want to get back to normal. We want to start traveling again,” he told reporters, before flagging the need for increased vaccine coverage.

“The easing of restrictions will be focused on Canadians who are fully vaccinated,” Trudeau said.

Every month since March 2020, Canada and the U.S. have extended the border restrictions to curb the spread of COVID-19. Now with summer around the corner and vaccination rates rising, lawmakers on both sides of the border are facing calls to lay out a plan for reopening.

A new poll conducted by Nanos Research Group for Bloomberg News shows Canadians are becoming more receptive to reopening the U.S. border. While 53 per cent of respondents remain somewhat uncomfortable with easing restrictions on U.S. travel, that’s down from closer to 80 per cent earlier in the pandemic.

Some travel and tourism businesses say it’s urgent. “Our occupancy rate has been a little lower than 20 per cent. I don’t think we’ll be able to do many more months like this,” Christiane Germain, co-president of the Quebec-based Germain Hotels chain, said in an interview on BNN Bloomberg Television.

U.S. and Canadian government officials began discussions to loosen restrictions on the world’s longest undefended border earlier this year. The border between the two nations has been closed to most non-essential travel since the start of the pandemic.

The restrictions have hit Canada’s tourism and airline sectors particularly hard. One estimate says the measures cost those industries about $20 billion (US$16.5 billion) in revenue last year. Trade data released by Statistics Canada on Tuesday show spending by foreign travelers to Canada fell to $889 million in April, near the decade-low levels seen earlier in the pandemic.

In addition to removing the COVID-19 test and quarantine requirements, the business groups are also asking the Canadian and U.S. governments to mutually recognize vaccine credentials to support the movement of inoculated citizens and produce a plan the includes clear guidelines for all other travelers.