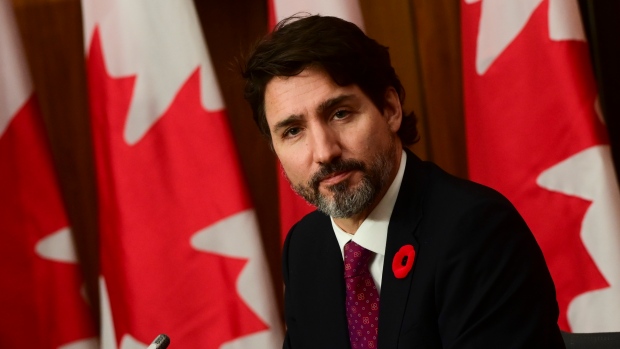 OTTAWA - Prime Minister Justin Trudeau is begging provincial governments to “act now” to slow the spread of COVID-19 after record-breaking spikes of the virus across most of the country in recent days.

“With rising cases of COVID-19 here at home, there's added pressure on all orders of government to keep people safe and to protect jobs,” Trudeau told a news conference in Ottawa Tuesday.

“But I would hope that no leader in our country is easing public health vigilance because they feel pressure not to shut down businesses or slow down our economy,” he said.

“I understand that worry but let me tell you: that's how we end up with businesses going out of business and the economy damaged even more.”

Ontario hit a new daily case record Tuesday for the second time in three days. Manitoba reported a record number of people in hospital with COVID-19. Quebec, British Columbia, Saskatchewan and Alberta have all recorded daily records of positive cases since Friday.

At the same news conference Dr. Theresa Tam, the chief public health officer, said the dramatic rise in cases is concerning and that “it is time to get really serious,” particularly as colder weather will push more activities indoors, where the risk of transmission is higher.

“It is clear we have yet to bend the curve on accelerated growth in Canada,” Tam said.

Tam reported that as of Monday evening, there were close to 40,000 active cases of COVID-19 across Canada, up from 33,000 just four days before.

An average of 51 people died of COVID-19 each day over the last week, compared to a seven-day average of 44 on Nov. 6.

Manitoba didn't need Trudeau's reminder, announcing before the prime minister issued his plea that the entire province is going to red, the highest level, on its pandemic-response scale.

Manitoba Premier Brian Pallister said as of midnight Thursday, there will be a month-long shut down, forbidding people from holding social gatherings with anyone outside their households, restricting restaurants to takeout, non-essential stores to curbside pickup and online services, and closing down museums, gyms, hair and nail salons, and in-person religious services.

“We're at a critical point,” said Dr. Brent Roussin, Manitoba's chief public health officer. “We need to maintain the ability of our health-care system to care for Manitobans.”

The province says 207 COVID-19 patients are in hospital, the highest number the province has seen so far.

Ontario Premier Doug Ford, whose province recorded a record of 1,388 cases Tuesday, would not rule out a wide-scale lockdown like the one in Manitoba.

“I think we've showed before at the beginning of this pandemic, if it needs to be done we'll do it,” Ford said.

Ontario had tightened restrictions on restaurants, gyms and public events like weddings a month ago for COVID-19 hot zones, including much of the Toronto area and Ottawa, but began to loosen them last weekend.

Ottawa has seen case counts stabilize but Toronto has not, prompting the city to ask the province to extend for another week the restrictions on gyms, movie theatres and indoor dining. Toronto Mayor John Tory said Tuesday those restrictions are not going to be lifted on Saturday after all because the spread of the virus is not under control.

Toronto reported a record 533 new cases Tuesday, a day after the previous record was set with 504 cases.

Both Tory and Ford urged Trudeau to send money to help businesses faster, particularly with new rent-relief measures that have passed the House of Commons but are awaiting approval in the Senate.

Trudeau said if provinces and cities have specific requests, they should call him. He ruled out using the federal Emergencies Act to invoke greater powers for Ottawa. He said the provinces are best positioned to decide what needs to be done, and the federal government is there to help get everyone through it.

In Edmonton Tuesday, Alberta Premier Jason Kenney's spokeswoman said Kenney's goal is to “protect both lives and livelihoods.” She pointed to Kenney's remarks Friday, when he urged Albertans to forgo extended gatherings at their homes but said a sweeping lockdown would be counterproductive.

“We can keep kids in school. We can keep businesses open. We can keep people employed,” said Kenney on Friday. “But we must all make trade-offs, compromises, and sacrifices. There are no magic solutions.”

Trudeau said it was very exciting news Monday to hear about the positive results of Pfizer's COVID-19 vaccine candidate, but said we can't get complacent now, with mass vaccinations at least months away.

Procurement Minister Anita Anand said every effort is underway to ensure the vaccine can be distributed to Canadians efficiently but timing still depends on when Health Canada approves a vaccine or vaccines for use here. She said her expectation is still that Canadians will start being vaccinated in the early part of 2021.