The proposed restriction is an attempt to cool a housing market that has soared during the Covid-19 pandemic. Surging prices have become a central issue in the campaign for the Sept. 20 vote, in which Trudeau hopes to regain a majority in parliament, with all three major parties promising crackdowns.

“You shouldn’t lose a bidding war on your home to speculators. It’s time for things to change,” Trudeau said at a campaign event in Hamilton, Ontario, about 40 miles southwest of Toronto. “No more foreign wealth being parked in homes that people should be living in.”

Outrage over housing affordability is increasingly directed at foreign buyers, especially in Vancouver, whose real estate has become increasingly popular among non-resident buyers from China and Hong Kong.

BNN BLOOMBERG POLL: Which of these is most important for housing affordability?

While the number of houses changing hands has declined in recent months after a pandemic-driven boom in activity, prices remain near record levels. The average cost of a home was $669,200 (US$529,840) in July, according to the Canadian Real Estate Association -- up 16 per cent from a year ago.

The Liberals are also proposing a ban on blind bidding, tax-free savings accounts for first-time buyers and more oversight of the real estate industry to fight money laundering. They’re also vowing to add or repair 1.4 million homes over the next four years.

“It’s not OK that the communities you grew up in aren’t in places where you can build a life, raise a family or grow old. It’s because the deck is stacked against you,” Trudeau said at the campaign event. 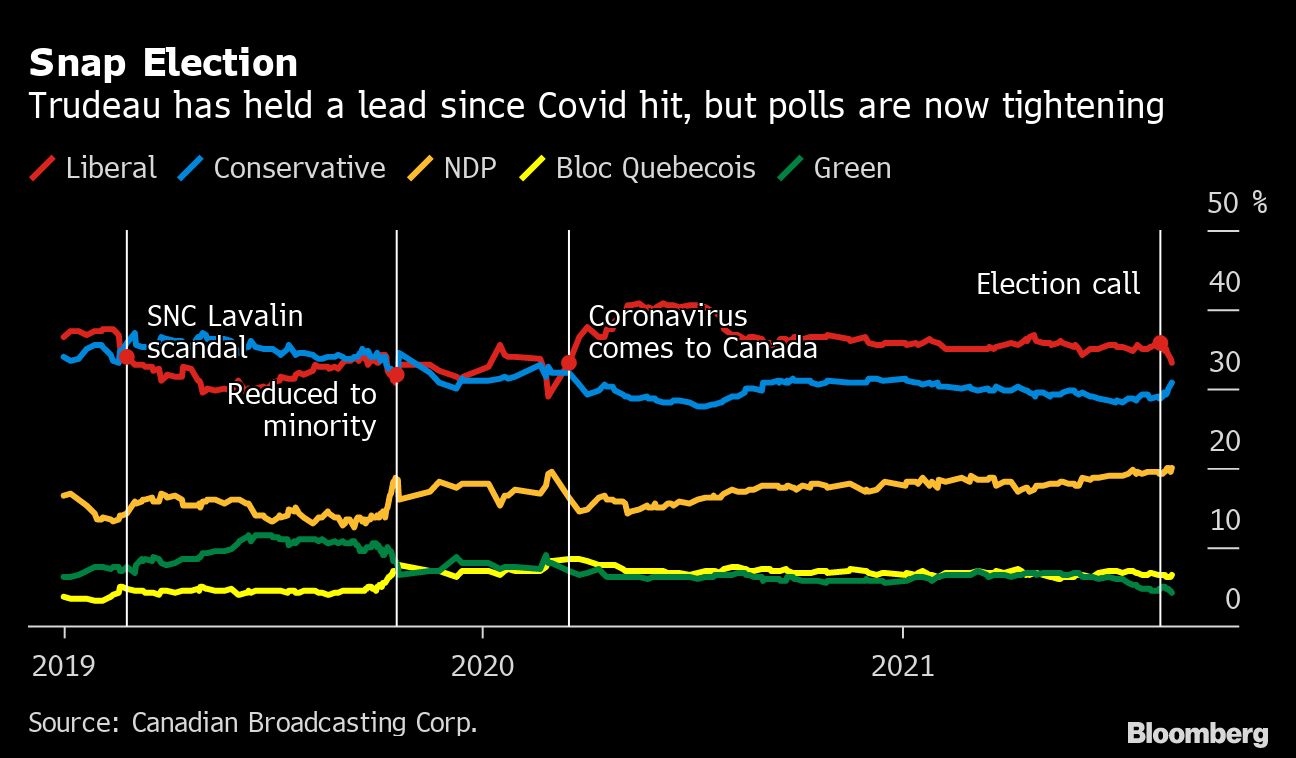 Erin O’Toole, leader of the Conservatives and Trudeau’s biggest rival in the election, put forward a similar plan last week. His party’s platform would ban home-buying for foreign investors living outside Canada for at least two years and refurbish 15 per cent of federal buildings into housing.

“Mr. Trudeau’s had six years and has failed,” O’Toole told reporters in Ottawa. “We have a housing crisis that’s exploded in the last three to four years under his leadership.”

The left-leaning New Democratic Party, meanwhile, is proposing a 20 per cent tax on homes bought by people who aren’t Canadian citizens or permanent residents and a reintroduction of a 30-year mortgage.

Recent polls show the race between the governing Liberals and their Conservative challengers is narrowing, dimming Trudeau’s prospects for regaining a majority. Some economists say the next government should, indeed, adopt policies to reduce foreign enthusiasm for the Canadian housing market, though any permanent solutions would take time.

“I think the way everyone, political parties and Canadians, should think about housing is there is no short term solution,” Benjamin Reitzes, rates and macro strategist at BMO Capital Markets, said by phone. “It’s a long term issue. They aren’t going to fix it in one year or with one policy.”