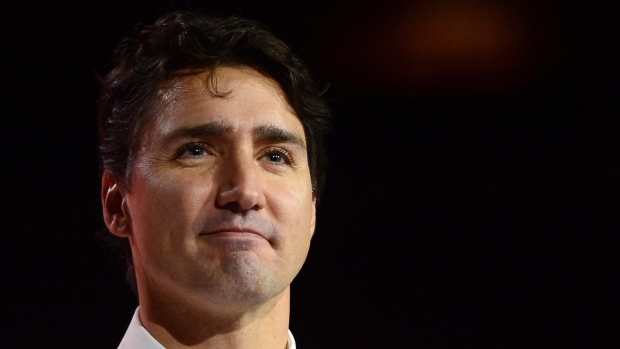 OTTAWA -- Prime Minister Justin Trudeau has offered his congratulations to U.S. president-elect Donald Trump and says he will work with the new administration.

Trudeau said Canada looks forward to working "very closely" with Trump, his administration and with the U.S. Congress in the coming years.

"Canada has no closer friend, partner, and ally than the United States," Trudeau said in a statement issued Wednesday morning.

The prime minister appeared later at a WE Day rally at Ottawa's Canadian Tire Centre, where he was greeted by roars from an energized crowd of young people.

When he acknowledged that many of them might have been up late watching the U.S. election returns, there were scattered boos from the crowd. He tried to wave off the booing and offered some encouraging words:

"The relationship between Canada and the United States is based on shared values and shared hopes and dreams and we will always work well together," he said. "We are strong because we listen to each other and we respect each other."

He said he sees a message in the election, in which Trump campaigned against perceived political elites and for ordinary folks.

"We share a purpose, our two countries, where we want to build places where the middle class and those working hard to join it have a chance."

He said it is time to work together.

After he won, Trump urged Americans to "come together as one united people" despite a deeply divisive campaign.

In Montreal, NDP Leader Tom Mulcair refused to take back his prior comments that Trump was a fascist.

Mulcair said in March the president-elect "is a fascist. Let's not kid ourselves, let's not beat around the bush."

The morning after the election, Mulcair, while refusing to use the word again, said, "I never changed my opinion on the matter and I stand by what I said."

He said it's time for Canadians to demand their government "stand up to Trump."

"I think when you see the type of racist, sexist comments that were made by Mr. Trump during the campaign those are things we don't want here in Canada," he said.

"And far from backing down from it I hope that Justin Trudeau will stand up for those same Canadian values."

The Canadian Chamber of Commerce urged Trudeau's government to get Canada's priority issues on Trump's agenda early, to ensure they didn't get lost in the global chatter.

"Measures that improve Canada-U.S. trade should be our priority with this new administration, but there is a long list of topics we will need to address, from softwood lumber to NAFTA to pipelines," said CEO Perrin Beatty. "It will be important for our government to build a solid relationship with the new administration and to demonstrate the benefits both our countries receive from our common ties."