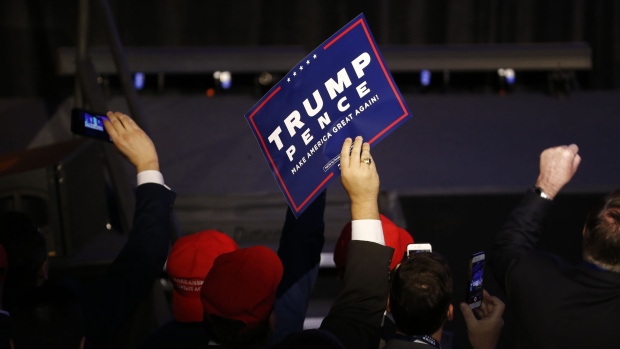 An attendee holds a campaign sign during an election night party for 2016 Republican Presidential Nominee Donald Trump at the Hilton Midtown hotel in New York, U.S., on Tuesday, Nov. 8, 2016. Fifty-one percent of voters nationally were bothered a lot by Trump's treatment of women, while Democrat Hillary Clinton's use of private e-mail while secretary of state was troubling to 44 percent, according to preliminary exit polling as voting neared a close in some states. Photographer: Andrew Harrer/Bloomberg , Bloomberg

(Bloomberg) -- Donald Trump’s 2016 presidential campaign has released former staffers from key sections of a nondisclosure agreement, freeing them to talk about their experience -- good or bad.

The move was disclosed in a court filing this week as Trump campaign lawyers angle to end a 2020 lawsuit challenging parts of NDAs that barred former staffers from disparaging Trump and his campaign and sharing other information about their work.

A federal judge in Manhattan last year declared those confidentiality and nondisparagement clauses “invalid and unenforceable” as applied to the former staffer who brought the case, Jessica Denson. Denson’s lawyers have since moved ahead with efforts to get the suit certified as a class action.

On Tuesday, campaign attorney Jared Blumetti filed a letter with a declaration signed in June by a campaign committee official stating that they would not “ever enforce or attempt to enforce any confidentiality or non-disparagement provisions contained in any written agreements signed by any employees, independent contractors, or volunteers who worked for the campaign on the 2016 Presidential Election.”

Blumetti also wrote that the campaign mailed a notice to former staffers alerting them that they were no longer bound by those parts of the agreement.

The campaign contends that makes Denson’s lawsuit moot, a position that Denson and her lawyers say they will fight. In a statement, Denson said that the campaign’s disavowal of the NDA language was a “step in the right direction,” but ultimately not legally binding.

“In another resounding victory for my team, the Trump campaign is waiving the white flag in my yearslong battle for truth and accountability,” Denson said. “But we will not allow the Trump campaign to circumvent the legal steps necessary to ensure that these NDAs are wholly unenforceable by both the campaign itself and the multitude of third parties it purports to empower, including the former president himself.”

Blumetti didn’t immediately respond to a request for comment.

US District Judge Paul Gardephe ruled last year that the language in the confidentiality and non-disparagement clauses -- which restricted what staffers could say not only about the campaign, but also about Trump, his family, and his business -- was too vague and broad to be enforceable.

(Updates with comment from Denson starting in sixth paragraph.)