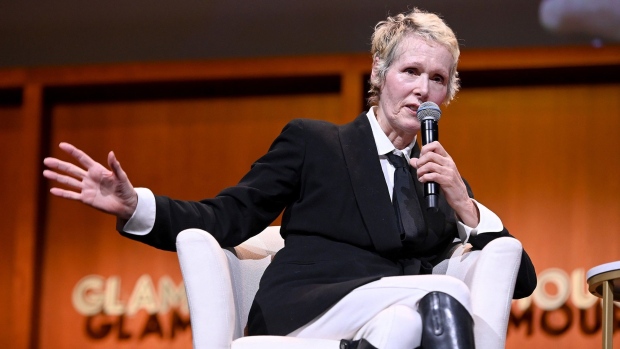 (Bloomberg) -- Writer E. Jean Carroll urged the District of Columbia’s highest local court to reject what her lawyers described as a “troubling” position by Donald Trump and the Justice Department that elected officials are immune against defamation claims whenever they speak about matters of public concern.

Carroll accused Trump of defaming her when he made disparaging comments in response to her allegation that he raped her in a department store dressing room several decades ago. The future of her lawsuit hinges on convincing the appeals court judges that Trump isn’t entitled to a legal protection that covers federal employees against being sued over actions they take as part of their job.

“Presidents are free to deny allegations of misconduct,” Carroll’s lawyers wrote in a brief filed Thursday. “But a White House job is not a promise of unlimited authority to brutalize victims of prior wrongdoing through vicious, personal, defamatory attacks.”

The suit was filed in New York, where Carroll lives, but a federal appeals court kicked the core question about Trump’s potential immunity to the DC Court of Appeals, since Trump made the allegedly defamatory statements in Washington. A hearing is set for Jan. 10.

Carroll’s attorneys argued that because Trump “acted with private motives” in speaking out against the writer, the DC court didn’t need to grapple with broadly defining the scope of a president’s duties. They argued against giving public officials “carte blanche to use the public platform inherent in their office to defame any private citizen -- anywhere, anytime, for any reason.”

“It would send a troubling message for the court to find that Trump’s repeated defamatory attacks on Carroll were simply part of his job,” Carroll’s lawyers wrote.

Carroll sued Trump as a private citizen, and nearly a year into the litigation --and while Trump was still in office -- the Justice Department moved to intervene and substitute the US government for the defendant. That change would effectively end the lawsuit, since the US is immune against defamation claims.

A federal district judge in Manhattan refused to let the Justice Department step in, making two key findings: first, that a sitting president wasn’t a government employee entitled to immunity under a federal law known as the Westfall Act; and second, that even if Trump did fall under the law, his comments about Carroll were outside his official duties as president.

The Justice Department kept up the fight after Trump left office. Government attorneys under the Biden administration made clear that they weren’t endorsing the substance of what Trump said about Carroll but agreed with him in principle on the sweep of immunity that applied to a sitting president.

The 2nd US Circuit Court of Appeals revived the fight in September, finding that a president could fall under the Westfall Act. But the judges also found that DC law wasn’t clear on whether Trump’s comments about Carroll would fall within the scope of his employment, and sent that question to DC’s equivalent of a state supreme court.

Trump and the Justice Department argued in briefs last month that the scope of a president’s duties included communicating with the press and the public about issues of public concern, including personal matters that raised questions about his fitness to serve.

The underlying case has moved forward in the meantime. Trump appeared for a deposition in October; that testimony isn’t part of the record on appeal, however. Carroll recently filed a separate lawsuit accusing Trump of battery in connection with her rape claim under New York’s Adult Survivors Act, which took effect in November.