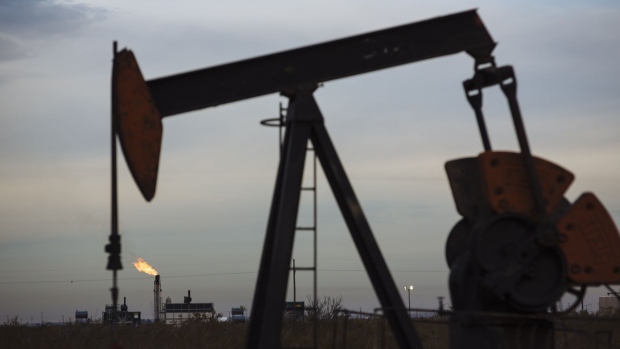 A gas flare burns past a pump jack in the Permian Basin area of Texas, U.S. , Bloomberg

The Trump administration is abandoning Obama administration curbs on methane leaks from oil and gas wells, a move that even some drillers oppose and that could become a campaign issue in the swing state of Pennsylvania.

Methane is the chief component of natural gas, making it a valuable energy source and commodity. Yet it is also a climate menace -- a powerful heat-trapping pollutant estimated to be roughly 80 times more powerful than carbon dioxide at warming the atmosphere over a 20-year period. Methane makes up roughly a 10th of U.S. greenhouse gas emissions, with much of that coming from the energy industry.

The latest initiative comes as President Donald Trump courts oil industry voters in gas-rich Pennsylvania and other states where the regulations have added costs. Yet the measure’s timing makes it vulnerable to being reversed if Joe Biden wins the election in November. And analysts say states might move to fill the gap left by the federal government -- perhaps going even further.

The measures, set to be released by the Environmental Protection Agency, finalize proposals issued over the past two years. Together, they will rescind methane-specific emission curbs at new and modified oil wells while easing some requirements for energy companies to frequently inspect equipment and repair leaks of other pollution known as volatile organic compounds.

Many inspections will be required semiannually, including for compressor stations that now have a quarterly requirement, according to two people familiar with the matter who asked not to be named before a formal announcement.

The rule change also short-circuits a legal requirement that the EPA apply the curbs it had imposed on new wells to roughly 1 million already in operation.

Agency officials and industry supporters argue that the regulations on methane are not needed because existing limits on ozone-forming volatile organic compounds already rein in the greenhouse gas.

“There’s this false narrative that controls are going to be coming off and emissions spewing -- and that’s just not correct,” said Howard Feldman, senior counselor of policy, economics and regulatory affairs at the American Petroleum Institute. “Our members are committed to emissions reductions.”

Environmentalists argue it’s insufficient to focus regulations only on releases of volatile organic compounds from new and modified wells, given the potential for big methane leaks from older, existing operations.

“Volatile organic compounds are not always a good proxy for methane emissions, and you’re going to leave emissions on the table if you don’t directly regulate methane,” said Ben Ratner, a senior director with the Environmental Defense Fund.

The oil industry is fragmented over the plan. Small operators argue the extra costs of methane leak detection can eat into already tight cash flows and force some wells to be shut down.

“These small business wells are a very different economic entity than the big wells they designed the original program for,” said Lee Fuller, executive vice president of the Independent Petroleum Association of America.

“The negative impacts of leaks and fugitive emissions have been widely acknowledged for years, so it’s frustrating and disappointing to see the administration go in a different direction,” Shell U.S. President Gretchen Watkins said in an emailed statement.

Environmentalists have already vowed to challenge the methane rules in court, just as they have mounted legal attacks on the EPA’s earlier decisions to ease greenhouse gas limits on power plants and automobiles. The lawsuits create an avenue for Biden to easily reverse course by negotiating a settlement or abandoning the government’s defense of the regulations, should he be elected.

Although there are several voluntary industry initiatives to pare methane emissions and replace leak-prone devices, activists argue those are no substitute for federal mandates that cover the entire U.S. industry.

“This is a situation where everyone needs to be taking the same precautions to prevent pollution,” said Darin Schroeder, an lawyer with the Clean Air Task Force.