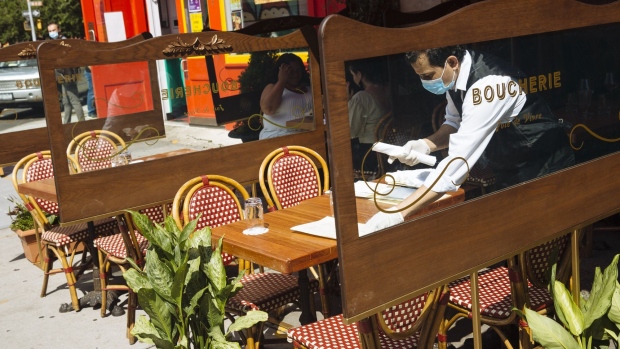 A worker wearing a protective mask and gloves sets a table outside a restaurant in New York. Photographer: Angus Mordant/Bloomberg , Bloomberg

The Trump administration released details of almost 4.9 million loans to businesses – from sole proprietors to restaurant and hotel chains – under the federal government’s largest coronavirus relief program so far, the US$669 billion Paycheck Protection Program.

The data, including the names of the program’s biggest borrowers, were posted Monday morning on the website of the Small Business Administration, which ran the program with the Treasury Department. The data can be found here.

The disclosures, which come after members of Congress and others voiced concern about the level of transparency surrounding the PPP, don’t provide full details for any loans. Names of companies that borrowed less than US$150,000 – a group that comprises the vast majority of the program’s borrowers – weren’t made public. And larger borrowers’ loans were disclosed only in broad ranges of values, such as US$5 million to US$10 million.

The program, passed hurriedly by Congress in March, was designed to provide small firms with loans of as much as US$10 million, based on a company’s average monthly payroll before the pandemic. The loans can become grants if borrowers use the proceeds mostly to pay workers -- with some spending allowed for rent and overhead costs. Almost from the beginning, the PPP was dogged by controversy as some publicly traded firms tapped it. Many returned PPP loans after their borrowing drew criticism.

The program’s supporters say it has kept tens of millions of workers employed during the pandemic and contributed to the surprising 2.5 million U.S. jobs added in May, with an additional 4.8 million jobs in June. The SBA and Treasury said borrowers reported that PPP loans supported 51.1 million jobs, or as much as 84 per cent of all small business employees before the pandemic. Treasury Secretary Steven Mnuchin has said the program supported at least 72 per cent of the small business payroll in all 50 states.

Monday’s release reflects loans totaling almost US$521.5 billion, which were approved between the launch of the program on April 3 and June 30, when the SBA temporarily stopped accepting new applications. Congress voted last week to extend the program until Aug. 8, and it reopened Monday morning.

Mnuchin had drawn opposition from transparency advocates for initially refusing to disclose names of companies that received PPP loans, saying the information is proprietary because loan amounts are based on borrowers’ payrolls. The administration relented after demands from lawmakers and agreed to release certain information while withholding other details.

For those loans below per cent$150,000, the agencies are disclosing specific loan amounts along with industry codes, ZIP codes, number of jobs supported and other data -- but no personally identifiable borrower information.

Meanwhile, SBA and Treasury officials said they provided access to the full data to congressional committees that have demanded it. Personally identifiable information in the data shared with Congress will be treated as confidential, according to letters the SBA and Treasury sent to the committees last month.

Critics want to see which larger firms and chains took PPP loans after reports that entities such as Shake Shack Inc. and the Los Angeles Lakers got loans ahead of mom and pop borrowers, prompting those two and others to return their loans. The public outcry spurred the Trump administration to promise to review all loans greater than US$2 million and to tell companies that had access to other sources of capital that they likely didn’t qualify for the bailout program.

Public companies returned almost 70 loans totaling US$436.5 million as of Monday morning, according to data compiled by FactSquared, but SBA and Treasury have not disclosed how many loans in all, including from closely held firms, were repaid. About US$38.5 billion in coronavirus relief loans for small businesses were canceled as of the end of May, according to a U.S. Government Accountability Office report, but officials said they will not be reporting details of returned and canceled loans.

News reports on the program have disclosed that members of Congress have taken or benefited from PPP loans, as well as firms that have reported significant revenue, closed facilities or filed for bankruptcy protection after getting PPP assistance. Some small-business owners sued large banks, accusing the lenders of prioritizing large loans for favored customers at the expense of the smallest firms that sought funding.

As part of Monday’s disclosures, federal officials have indicated that they’d release demographic data related to the loans – though officials said the information is limited because it’s based on what lenders asked borrowers to provide voluntarily. The SBA’s inspector general had criticized the agency in a May report for failing to collect standard demographic information on applications for loans that would have allowed it to prioritize loans for businesses owned by minorities, women and veterans, as well as for those in rural areas, as Congress intended.

Trump administration officials have said that by revealing names for the biggest borrowers, Monday’s disclosure accounts for about three-fourths of the total dollar amount in loans approved. But critics say that’s deceptive because almost 87% of all the loans were for amounts less than US$150,000. The average loan size was about US$107,000, SBA and Treasury said.

Almost 3.3 million loans, or 67 per cent of the total, were for amounts of US$50,000 or less, data released by SBA and Treasury as of June 30 show. They made up 11% of the total amount lent. At the other extreme, more than 4,800 loans were for more than US$5 million, accounting for less than 1% of the number of transactions and almost seven per cent of the amount lent, data show.

Companies in the health care and social assistance industry accounted for the largest amount in loans at US$67.4 billion, followed by professional, scientific and technical services firms at US$66.4 billion; construction at $64.6 billion; manufacturing at US$54 billion; and accommodation and food services at US$42.1 billion, according to the data released.

California, Florida, Texas, New York and Illinois had the largest numbers of loans and the most in dollar amount approved, data show.

There were 5,461 lenders who participated in the program, with large banks that have more than $50 billion in assets accounting for 36 per cent of the dollar amount, and lenders with less than US$10 billion approving 44 per cent, according to the data. JPMorgan Chase had the largest amount of new dollars approved at US$29.1 billion, or 4.4 per cent of the total, followed by Bank of America at US$25.2 billion.

The SBA was overwhelmed by initial demand for the loans, and the initial US$349 billion in funding was exhausted in just 13 days. Demand waned after Congress approved a second round of US$320 billion, and almost US$132 billion remained -- after bank fees and processing costs -- as of June 30, according to SBA and Treasury. Proposals to repurpose the funds for small firms that still need aid are expected to be debated in negotiations for an additional round of stimulus later this month.

--With assistance from Jason Grotto.