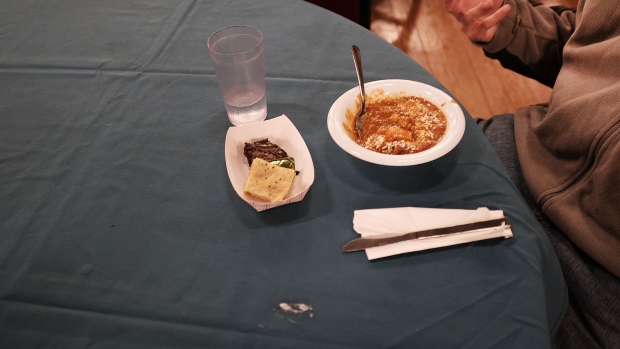 PHILADELPHIA, PA - OCTOBER 18: Michael, who is living in a shelter, eats a meal at Broad Street Ministry (BSM) on October 18, 2018 in Philadelphia, Pennsylvania. The ministry serves thousands of free meals five days per week while also providing the homeless with a mail center, a clothes mending facility, counseling and medical screenings for the homeless and those that are in financial distress. Recent data released by the U.S. Census Bureau shows that Philadelphia's poverty rate remains at roughly 26 percent, making it the poorest of the nation's 10 major cities. While sections of the City of Brotherly Love are thriving, homelessness and generational poverty have been a persistent problem for Philadelphia. The national poverty rate is 13 percent. (Photo by Spencer Platt/Getty Images) , Photographer: Spencer Platt/Getty Images North America

(Bloomberg) -- The Trump administration will announce a plan Wednesday to end food stamps benefits for about 750,000 Americans, issuing a new regulation that makes it harder for states to gain waivers from a requirement that beneficiaries work or participate in a vocational training program, according to people familiar with the matter.

Conservatives have long sought cuts in the federal food assistance program for the poor. House Republicans tried to impose similar restrictions last year when Congress renewed the program but were rebuffed in the Senate.

The work requirement only applies to “able-bodied” recipients who aren’t caring for a child under 6 years old.

The measure would be the first of three Trump administration initiatives curtailing food stamp benefits to take effect. The Urban Institute estimated in an analysis last month that the measures together would cut 3.7 million beneficiaries from the Supplemental Nutrition Assistance Program or SNAP, often known by its previous name, food stamps.

Currently, states can receive waivers for work requirements if their unemployment rates are at least 20% above the national rate, which was 3.6% in October. The regulation, which will be published in the Federal Register Thursday, imposes stricter standards for the waivers.

A Brookings Institution study published in 2018 found more stringent work requirements are likely to hurt people who are already working but whose employment is sporadic. Recipients must work an average of 20 hours a week each month to meet the requirement.

When it initially proposed the regulation in February, the administration forecast the stricter work requirement would end benefits for more than 750,000 people in its first year. At the time, the Department of Agriculture estimated the step would save $1.1 billion in the first year and $7.9 billion over five years.

The final regulation has about the same impact, said a person familiar with the measure.

States seeking waivers to the work rule would have to meet the new, more stringent standards by April 1, said the people, who asked for anonymity to discuss the plan.

As of August, 36.4 million Americans received food stamps, according to USDA. Enrollment has declined as the economy has improved and was down 1.7 million from a year earlier.

To contact the editors responsible for this story: Joe Sobczyk at jsobczyk@bloomberg.net, John Harney, Joshua Gallu