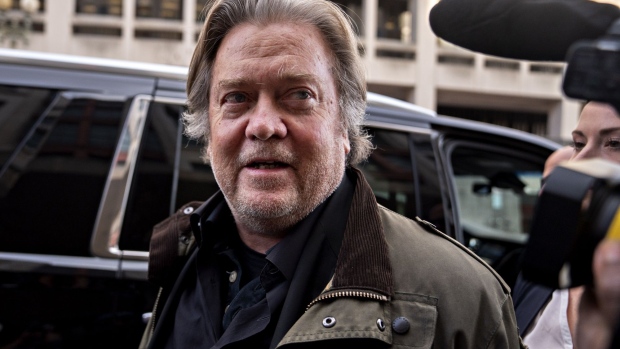 (Bloomberg) -- Two allies of former President Donald Trump will not appear Thursday as initially ordered to provide closed-door testimony to a House committee investigating the Jan. 6 insurrection at the U.S. Capitol, according to multiple people.

Steve Bannon, who served as the former president’s chief political strategist and helped run his 2016 campaign, has refused at Trump’s request to cooperate with the committee’s subpoena, and could become the focus of swift congressional contempt action, said a person familiar with the matter.

Also subpoenaed to provide a deposition Thursday is former Defense Department official Kashyap Patel. But unlike Bannon, Patel is engaging with the committee, according to panel officials, despite also being urged by Trump’s legal team not to do so. His deposition is being delayed as those talks continue.

Former White House Chief of Staff Mark Meadows and former Deputy Chief of Staff for Communications Dan Scavino have also been instructed by subpoena to appear for depositions Friday. It remained unclear Thursday if they will do so. Trump doesn’t want them cooperating either. But Meadows, a former House member, is also described as actively engaging with the committee.

Members on the committee of seven Democrats and two Republicans, led by Democrat Bennie Thompson of Mississippi, say the panel will take whatever steps are necessary to enforce compliance by subpoenaed witnesses.