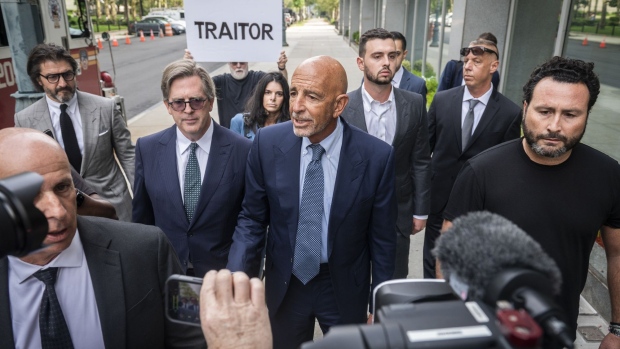 (Bloomberg) -- Colony Capital founder Tom Barrack failed in his bid to have a US judge dismiss charges that he illegally tried to influence Trump administration policies on behalf of the United Arab Emirates.

US District Judge Brian Cogan ruled Wednesday that Barrack and his former assistant, Matthew Grimes, must stand trial in Brooklyn, New York, on charges they didn’t register as foreign agents with the attorney general. Barrack, a longtime friend of President Donald Trump, faces separate charges he made false statements to the FBI.

Cogan rejected several arguments by the defendants relating to whether they acted at the direction and control of the UAE. For instance, Cogan said he wouldn’t “wade into the murky waters of defining what exactly the degree of a foreign principal’s direction or control need be.”

The judge also declined to consider the argument that prosecutors offered no evidence Barrack and Grimes agreed to act as agents. Cogan said “the government is entitled to present its evidence at trial.”

Cogan also rejected Barrack’s argument that prosecutors took too long to indict him, saying he can cross-examine witnesses at trial about how the length of time affected their memories.

But Cogan granted Barrack’s motion to unseal handwritten notes of his statements to the FBI during his interview on June 20, 2019, and a redacted cover page to an agency memo on the session.

The judge also rejected Barrack’s request for additional communications between Barrack and the Trump campaign and administration about Middle East policy. Prosecutors said they already handed all relevant material in their possession. Asking for more is a “classic fishing expedition,” the judge ruled.