If there is a 'blue wave' in the U.S. elections, the S&P will feel some pain: Market strategist

A similar situation could unfold again Tuesday night if Trump pulls off another win.

That’s because investors are increasingly betting that former vice president Joe Biden is on his way back to the White House.

“We have to get some type of restoration of normalcy. It would be very good for the market and also very good for the underlining economy,” said Anthony Scaramucci, Trump’s former White House director of communications and Wall Street veteran.

Scaramucci has been a frequent critic of Trump. But his view lines up with that of many pundits — some of whom don’t anticipate holdups in tallying the votes, despite the need to navigate a flood of mail-in ballots.

“We remain confident in our base case that Biden will win, convincingly enough that we will know results next week,” Lew Lukens, a senior partner at the advisory firm Signum Global, said in a recent note to clients.

“Biden still has a lead nationally — a modest lead in the key states, but he’s still the front runner,” said Greg Valliere, AGF’s chief U.S. policy strategist. “He would be more predictable and pragmatic.”

Aside from Biden’s lead in national polls, traders are eyeing the near-daily record cases of coronavirus across the U.S., which are threatening to unravel the economy once again.

“They believe Biden and his administration will effectively administer a vaccine,” according to Amy Wu Silverman, head of derivatives strategy at RBC Capital Markets.

Investors are also desperate to see Republicans and Democrats stop squabbling over a much-needed stimulus package.

While a bill is expected to eventually pass regardless of who wins, it is generally believed a so-called “blue wave” – which would see the Democrats take the White House and both houses of Congress – would pave the way for a plan that offers the most impactful financial aid to Americans.

“If Biden wins the White House and adds to the majority in the House of Representatives and perhaps even creates a majority in the Senate, there’s room for a pretty expansive fiscal policy package,” said Tim Quinlan, senior economist at Wells Fargo Securities.

“This is not chump change. This is a difference of several trillion dollars,” Kathryn Rooney Vera, chief investment strategist with Bulltick Capital Market, said Friday. “That would be a very near-term boon for equities.”

The market’s bullish view on Biden, who was initially seen as the less business-friendly candidate, gained steam over the summer, according to RBC’s Amy Wu Silverman.

“If you look back to April during the height of the pandemic, the market didn’t really like the idea of a Biden victory,” she said.

But when it comes to the immediate reaction on election night, most traders appear to be betting against a Trump victory, setting the stage for an eerily similar scenario to 2016.

Trump, who had made campaign promises four years ago to tear up trade agreements and build a wall with Mexico, was viewed as the more unpredictable candidate. Markets hate uncertainty and his election night success prompted an abrupt adjustment.

Stocks ended up rallying in Canada and the U.S. in the trading day that followed, as investors warmed to the idea of a business-friendly president. 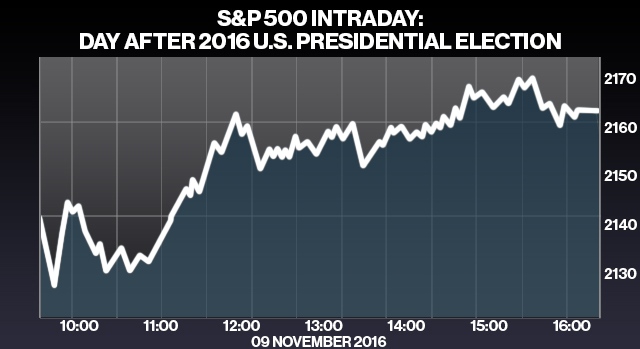 Four years later, markets are well aware of the disruption Trump can cause, particularly on the trade front.

According to veteran trade lawyer Mark Warner, investors are betting a Trump win would open the door to more volatility and a continued war on globalization.

“If Trump manages to pull this out, I think on the trade front we’re looking at more of the same — more uncertainty, more friction, more contests with China and probably stoking up more of a fight with Europe than what we’ve seen so far and, of course, with Canada,” Warner recently told BNN Bloomberg

According to traders, a Trump win on Tuesday could once again put pressure on stock futures and would likely boost demand for the U.S. dollar in a so-called “flight to safety.”

By comparison, a Biden victory would be less likely to spur nervous buying of the U.S. dollar, which could actually boost the loonie.

A split outcome, meanwhile — with Biden or Trump winning the presidency, but having less power in Congress — would be more confusing for the markets.

Take, for example, the scenario of Biden winning the presidency with a Republican-controlled Senate.

That could result in a smaller-than-hoped-for stimulus package, compared to what might occur under a so-called “blue wave.” Traders also fear it could push Biden to fight harder for issues such as stricter lockdowns, tax reform, and crackdowns on oil and tech.

As for a contested election, that is a less than inspiring outcome for markets.

“The worst scenario is a contested election,” said Bulltick Capital Markets’ Rooney Vera. “For the markets, that level of uncertainty would be absolutely atrocious.”

Many investors still recall the battle in 2000 between George W. Bush and Al Gore, which dragged on for five weeks after election day. Stock prices steadily declined over that stretch.

That contest was focused on Florida, which remains a key battleground state in this year’s election.

“Florida — after their disaster in 2000 — is a lot better now," AGF's Greg Valliere told BNN Bloomberg. "They count electronically, they count quickly. If, by 9:30pm ET on Tuesday evening it looks like Joe Biden is ahead in Florida, we can probably go to bed. Because there’s no way in the world Donald Trump could win the election without Florida.”