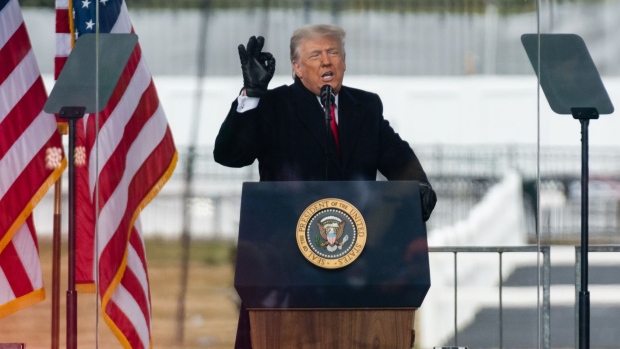 (Bloomberg) -- Former President Donald Trump’s top allies could face subpoenas in a House committee’s investigation into the Jan. 6 insurrection at the U.S. Capitol, as the nascent panel considers how best to flex its oversight muscle.

Members of the House committee made clear during their dramatic first public hearing Tuesday that Trump’s activities that day are a central focus of their inquiry. The hearing centered on gripping testimony from four officers who helped defend the Capitol against a violent mob of Trump’s supporters armed with hammers, metal bars, knives and batons.

The committee, which includes seven Democrats and two Republicans, has subpoena power, and could use it in the next week or two to bring in witnesses and gain access to documents and other material, said a committee official, speaking on the condition of anonymity to discuss private deliberations. Among those key witnesses could be Trump administration officials and some of the former president’s allies in Congress.

During the committee’s hearing on Tuesday, Liz Cheney, a Wyoming Republican, placed Trump at the center of the inquiry.

“We must also know what happened every minute of that day in the White House -- every phone call, every conversation, every meeting leading up to, during and after the attack,” Cheney, who was ousted from her spot in House Republican leadership for bucking her party by criticizing the former president, said at the outset of the hearing.

Democratic Representative Adam Schiff, who was the lead prosecutor in Trump’s first impeachment trial and sits on the committee, acknowledged Monday Congress’ power to enforce its subpoenas, particularly against the executive branch, had been locked in legal battles during the Trump administration.

But with the present Justice Department under Democratic President Joe Biden, he said, “it’s a different situation now.”

The four officers told the panel in detail of the beatings, injuries, racist slurs and other violence they endured. Some of them, too, directed their focus at Trump.

“He could have done a lot of things. One of them was to tell them to stop,” Capitol Police Sergeant Aquilino Gonell said of Trump. Capitol Police Officer Harry Dunn said of the Capitol intruders, “A hit man sent them.”

Panel Chairman Bennie Thompson, a Mississippi Democrat, said after the hearing that the officers asked the committee to find out “who participated in, who financed it, who encouraged, who orchestrated it -- and part of that is the challenge of this committee.”

Cheney, standing at Thompson’s side, reiterated that, “obviously the events of that day at the White House are a focus and making sure that we get to the bottom of what went on.”

In a later interview on CNN, Cheney said the committee should be willing to go to court to enforce subpoenas of Trump aides or even members of Congress to get information about what went on that day.

It’s unclear when the committee will hold its next public hearing, as it pursues other avenues, including investigating the financing of what appears to be coordination in the attack. But Thompson said the panel could come back before the end of August recess, which starts this weekend and extends until Sept. 20.

House GOP leader Kevin McCarthy and other Republicans held events throughout the day to air their grievances about the committee, particularly that Cheney and Representative Adam Kinzinger of Illinois -- who were among the 10 Republicans who voted to impeach Trump for his role in stoking the mob -- are the only GOP members of the panel.

Both are appointees of House Speaker Nancy Pelosi. McCarthy has refused to let other Republicans participate because Pelosi vetoed two of his choices, Representatives Jim Banks of Indiana and Jim Jordan of Ohio, two ardent Trump allies.

Pelosi has said she has concerns with “statements and actions take by these members” that could hamper the integrity of the investigation. Both were were among Republicans who voted not to certify some of the Electoral College votes from the 2020 presidential election once Congress reconvened after the riot was quelled.

McCarthy argued that Pelosi rejected them because they raised tough questions about why the Capitol security was not better prepared.

Representative Elise Stefanik of New York, a Trump loyalist who replaced Cheney in the House Republican leadership, said Pelosi “prioritized her partisan political optics” over the safety and preparedness of the Capitol Police.

“And it was only after Republicans starting asking these important questions that she refused to seat them,” she said.

Republicans have said Democrats would use the committee to attack Trump. On Tuesday, they cast Cheney, long a Trump antagonist, as a cooperative ally to those efforts.

“She despises him,” Representative Troy Nehls of Texas, who had been a McCarthy appointee to the committee, said of Cheney’s feelings on Trump.

Nehls said he heard very few questions at the hearing that would get “to the truth” as “to why this institution, why the the Capitol Police were not prepared to deal with Jan. 6.”

McCarthy, Nehls and other Republicans also continued what has become a familiar line that Cheney and Kinzinger are “Pelosi Republicans.”

Kinzinger responded: “All I have to say to that is we had a big attack on Jan. 6. We heard very emotional testimony today. And that’s what’s on the forefront of my mind. And if people want to get petty, that’s fine.”