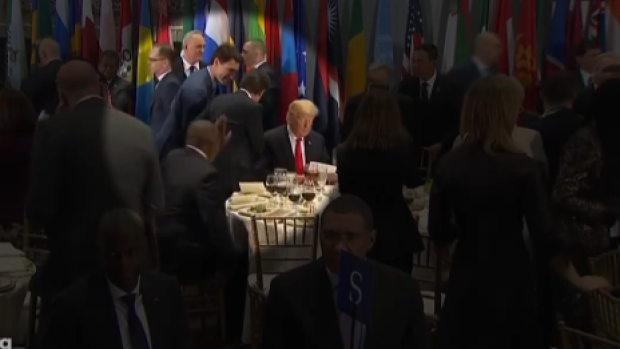 If body language at a UN luncheon is any hint, Justin Trudeau is still in Donald Trump’s doghouse.

The U.S. president and Canadian prime minister attended the same luncheon at the United Nations General Assembly in New York on Tuesday, but it was hardly a warm encounter. The two mingled near each other but didn’t speak before Trump sat down for lunch. Trudeau then approached Trump, standing behind him without the president appearing to acknowledge him. Trudeau tapped him on the shoulder and the men shook hands in a brief exchange. Trump didn’t stand up.

Later, Trump’s other NAFTA partner, Mexico’s Enrique Pena Nieto, came by and the U.S. president stood to shake his hand. Trump also stood to greet Egyptian President Abdel Fattah El-Sisi. Trump spoke to both for longer than he did Trudeau.

In a speech at the UN Wednesday, Trudeau said there isn't anything about the encounter to read into.

Trudeau said he was speaking to the president of South Africa and moved around the table to speak to the Italian prime minister when he shook hands with Trump, who Trudeau said was re-reading his notes for his upcoming speech.

“It was an interaction like so many are in UN – quick but cordial," Trudeau told reporters Wednesday.

"There are all sorts of opportunities for me to speak with Presdient Trump, and that was not the time,” he added.

The UN encounter comes as the countries bear down on a U.S. deadline for a new NAFTA pact, but they remain divided on a handful of core issues. Trump and Trudeau initially had a warm relationship, before the Group of Seven summit in June where Trump erupted after a Trudeau press conference.