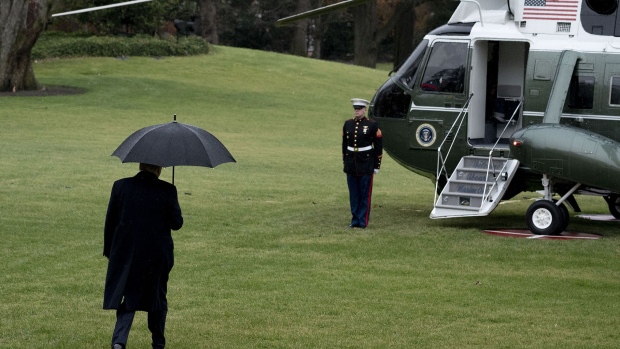 Donald Trump walks on the South Lawn of the White House before boarding Marine One in Washington, D.C. , Photographer: Andrew Harrer/Bloomberg

President Donald Trump asked the U.S. Supreme Court to stop Deutsche Bank AG and Capital One Financial Corp. from handing over his financial records to two House committees, putting a third case before the justices as he seeks protection from congressional and grand jury investigations.

The latest filing on Friday stems from a Dec. 3 federal appeals court decision that largely rejected Trump’s contentions that lawmakers were exceeding their authority and intruding on his privacy by sending subpoenas to the banks.

The House Intelligence and Financial Services Committees are demanding financial records covering Trump, his family and his businesses. The panels say they have a variety of legislative interests, including investigations of money laundering, terrorist financing and Russian efforts to influence U.S. elections.

“The committees’ desire to use the president, his family, and his businesses as a case study is not a legitimate legislative purpose,” Trump said in the new filing.

The application was filed with Justice Ruth Bader Ginsburg, who handles emergency matters from New York. She could act on her own or refer the request to the full nine-member court.

In a separate case, Trump on Thursday asked the Supreme Court to hear his challenge to a House subpoena for financial records held by his accounting firm, Mazars USA. In addition, the justices are scheduled to discuss at their Dec. 13 private conference whether to take up Trump’s challenge to a subpoena by a New York prosecutor for his tax returns.

The cases aren’t directly tied to the ongoing House impeachment probe, which centers on Trump’s push to have Ukraine announce investigations that could help him politically. Federal appeals courts ruled against Trump in all three subpoena disputes.

The new filing asks the Supreme Court to block the subpoenas until the justices decide whether to take up the president’s yet-to-be-filed appeal. The court has already taken that step with the House subpoena to Mazars, blocking it temporarily.

Breaking with four decades of presidential tradition, Trump has declined to make his detailed financial records public. He sued in April to stop Deutsche Bank and Capital One from handing over his records after they had been subpoenaed by the House panels. Trump lost at a federal trial court and the New York-based 2nd U.S. Circuit Court of Appeals.

The two subpoenas to Deutsche Bank are demanding account information for Trump, his children and their immediate families and seven Trump businesses. The subpoenas require documents dating to 2010 and in some cases with no time limit. Deutsche Bank has said it doesn’t have Trump’s personal tax returns.

Capital One, where Trump has held checking and savings accounts since at least 2015, was ordered to supply records for 15 Trump businesses, according to court papers filed by Trump’s legal team.

Deutsche Bank and Capital One aren’t taking a position in the fight.