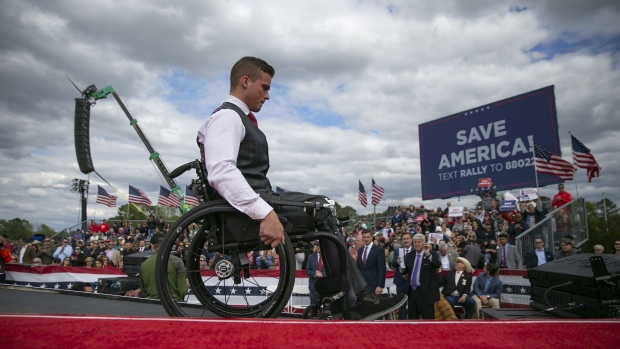 (Bloomberg) -- Scandal-plagued Republican US Representative Madison Cawthorn narrowly lost his bid for a second term despite former President Donald Trump’s last-minute plea to North Carolina voters to give the lawmaker a “second chance.”

State Senator Chuck Edwards won the GOP primary for the heavily Republican district after winning the backing of nearly every major party leader in his state, including US Senator Thom Tillis.

With 99% of the votes counted, Edwards had 33.4% to Cawthorn’s 31.9%. The six other candidates in the crowded field trailed well behind.

Cawthorn’s defeat reflects the power that party leaders still hold in their home states and is a sign that politicians can go too far, even in the Trump era.

In a statement the day before the primary, Trump acknowledged the headwinds the youngest member of Congress was up against but continued to urge voters to stand by him. He referred to the car accident that left Cawthorn, at the age of 18, in a wheelchair, “a traumatic experience to say the least.”

“When Madison was first elected to Congress, he did a great job,” Trump said. “Recently, he made some foolish mistakes, which I don’t believe he’ll make again...let’s give Madison a second chance!”

Cawthorn, 26, came to Congress in 2020 alongside right-wing GOP Representatives Lauren Boebert of Colorado and Marjorie Taylor Greene of Georgia. His seat opened when Mark Meadows left to become Trump’s chief of staff. As the youngest House member, he’s managed to attract headlines -- rarely for reasons that pleased leadership.

In the past two months, Cawthorn was stopped for a second time for attempting to bring a loaded gun onto an airplane, pulled over by police a second time for driving with a revoked license, was accused of insider trading and called Ukrainian President Volodymyr Zelenskiy a “thug” after Russia invaded his country.

Shortly after the cocaine comments, a photo leaked of the congressman wearing women’s undergarments and after that, a nude video of Cawthorn was released. In the past any of these scandals alone, paired with rebukes from congressional leadership, would lead voters to abandon a candidate.

“To have a sitting U.S. Senator from the same party come after you is extremely rare,” said Sarah Longwell, a Republican strategist and publisher of the conservative-leaning The Bulwark. “This isn’t happening to Marjorie Taylor Greene. I think it just goes to show how embarrassing people in the party find him.”

Yet in the few polls conducted in the district before the primary, Cawthorn had clung to a lead. A survey by GOPAC Election Fund, a Republican group, found Cawthorn’s support fell 11 percentage points from 49% in late March to 38% in late April. Support for runner-up Edwards has risen from 14% to 21% during that time.