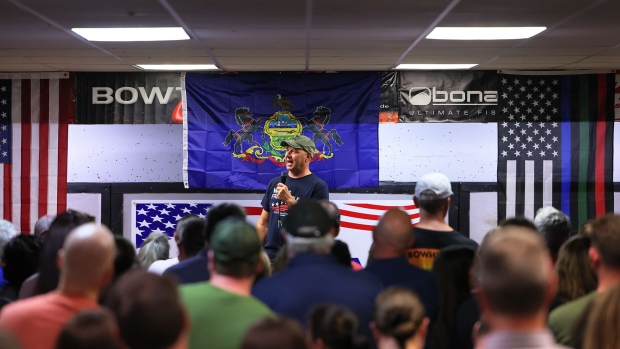 (Bloomberg) -- Former President Donald Trump endorsed Doug Mastriano in the GOP primary for Pennsylvania governor as some Republicans make a late bid to stop the candidacy, fearing he would lose in the general election.

Mastriano, a state senator, has been a prominent supporter of Trump’s false claims that the 2020 presidential election was stolen. On Saturday, Trump said he wanted to support him in return.

“There is no one in Pennsylvania who has done more, or fought harder, for election integrity,” Trump said in his endorsement statement. “He is a fighter like few others, and has been with me right from the beginning, and now I have an obligation to be with him.”

But there has been a movement by some Pennsylvania Republicans in the days before Tuesday’s primary to coalesce behind former U.S. Representative Lou Barletta as an alternative to Mastriano, the front-runner in polls, due to concern he would lose the general election to the likely Democratic nominee, Attorney General Josh Shapiro.

State Senate Leader Jake Corman dropped out of the race and endorsed Barletta. Prominent Pennsylvania Republicans, including former US Senator Rick Santorum, are also supporting him in a bid to stop Mastriano.

Barletta, responding to Trump’s endorsement of his opponent, said he’s the only candidate who can unite the party and win in November. He sought to signal confidence he’ll finish ahead in the primary on Tuesday, saying in a statement that “I look forward to having President Trump’s endorsement Wednesday morning.”

Trump said in his statement that Mastriano and celebrity physician Mehmet Oz, his endorsed candidate in Pennsylvania’s Republican US Senate primary, “will make an unbeatable team going into the most important midterm election in the history of our country.”

Mastriano has been aligned with political commentator Kathy Barnette, whose late rise in the polls has created a close three-way Senate race with Oz and former Bridgewater Associates Chief Executive David McCormick. Mastriano and Barnette appeared together at a campaign rally in Bucks County on Saturday that was closed to the media.