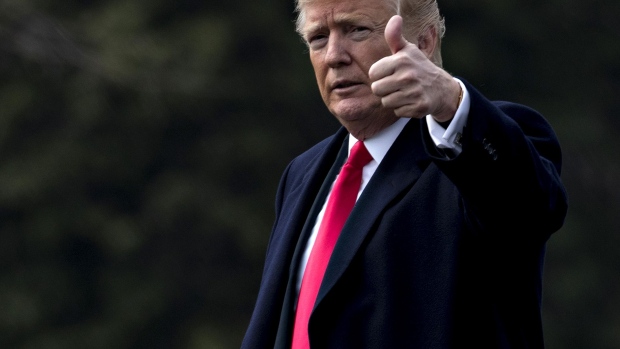 U.S. President Donald Trump gives a thumbs up while walking on the South Lawn of the White House before boarding Marine One in Washington, D.C. Photographer: Al Drago/Bloomberg , Bloomberg

(Bloomberg) -- President Donald Trump beat back a lawsuit by 215 congressional Democrats who say he has been violating the Constitution’s emoluments clauses by profiting from foreign government spending at his Washington hotel and other properties.

A federal appeals court in Washington on Friday dismissed the case, saying members of the House and Senate lacked the legal standing to sue the president.

“The Members can, and likely will, continue to use their weighty voices to make their case to the American people, their colleagues in the Congress and the President himself, all of whom are free to engage that argument as they see fit,” a three-judge panel of the federal appeals court in Washington said on Friday. “But we will not—indeed we cannot—participate in this debate, overturning an April trial court ruling.“ They heard arguments on Dec. 9 in Washington.

The decision was the second by a federal appeals court throwing out an emoluments lawsuits against the president. A three-judge panel in Richmond, Virginia, last year dismissed a suit filed jointly by the attorneys general of Maryland and the District of Columbia. A three-judge appeals panel in New York revived a third suit in September, after a trial court judge dismissed it.

Trump has argued that profits from an ongoing business shouldn’t be considered emoluments. That question has yet to be addressed by any court. His family-owned company opened the D.C. hotel, in a building leased from the government, a few months before the 2016 election.

The case is Blumenthal v. Trump, 19-5237, U.S. Circuit Court of Appeals for the District of Columbia (Washington).

(Updates with details of ruling.)

To contact the editors responsible for this story: David Glovin at dglovin@bloomberg.net, Anthony Lin