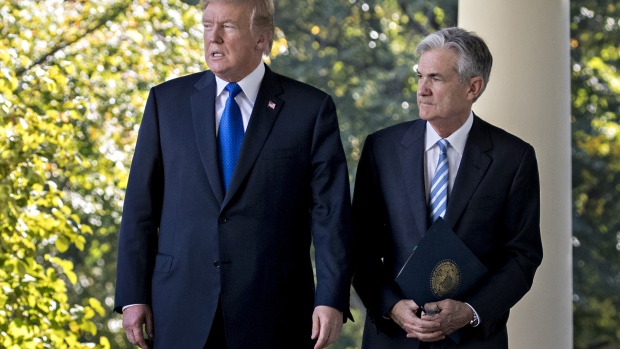 (Bloomberg) -- President Donald Trump has told confidants as recently as Wednesday that he believes he has the authority to replace Jerome Powell as chairman of the Federal Reserve Board, according to people familiar with the matter.

In Trump’s line of thinking, he could demote Powell to be a board governor, but isn’t planning to do so right now, the people added.

Their account of the president’s conversations emerged just hours after Powell said he intends to serve his full four-year term despite Trump’s continuing criticism of Fed policy. Earlier this year, Trump asked White House lawyers to explore options for removing him, Bloomberg reported on Tuesday.

The people, who requested anonymity to discuss internal White House deliberations, said that Trump’s frustration with Treasury Secretary Steven Mnuchin is limited to his recommendation to pick Powell as Fed chair. Mnuchin is otherwise in good standing with the president, they said.

Trump’s attacks on the Fed are a departure from almost three decades of caution in the White House about making public comments on monetary policy, out of respect for the independence of the central bank.

“I think the law is clear that I have a four-year term, and I fully intend to serve it,” Powell said at a press conference in Washington on Wednesday after policy makers met to discuss interest rates. They left the benchmark rate unchanged, while opening the door to a rate cut later this year.

White House lawyers think there is a way to follow through with a demotion if that’s what the president wants, but there has been some disagreement in the Counsel’s office, according to a person familiar with the matter.

Asked about the president’s belief that he could demote Powell, a White House spokesman declined to comment on a decision that was not currently being carried out.

Kevin Hassett, the departing chairman of the White House Council of Economic Advisers, said “one hundred percent he won’t do it,” referring to Trump’s consideration of demoting Powell. Asked if Trump should do that, Hassett responded: “No.”

Trump has repeatedly accused Powell of not doing enough to bolster the economy. The president has called for lower interest rates as he seeks to offset the headwinds created by his trade war with China and to create a favorable backdrop for his re-election campaign next year.

Trump told ABC News Friday that he disagreed with Powell “entirely,” adding that “if we had a different person in the Federal Reserve that wouldn’t have raised interest rates so much,” economic growth would have been stronger.

The Federal Reserve Act provides explicit protection for Fed governors against removal by the president except “for cause.” Courts have interpreted the phrase to require proof of some form of legal misconduct or neglect of basic duties. A disagreement over monetary policy wouldn’t meet that bar.

It’s less clear, however, whether the president can demote a chair, removing him or her from the top position while leaving the person as a Fed governor.

(Updates with context throughout on Fed’s independence.)

To contact the reporter on this story: Jennifer Jacobs in Washington at jjacobs68@bloomberg.net

To contact the editors responsible for this story: Michael Shepard at mshepard7@bloomberg.net, John Harney, Margaret Collins