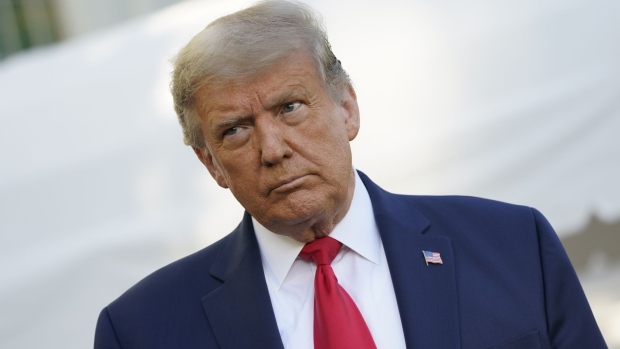 President Donald Trump said he was ready to boost his offer for spending in a fiscal-stimulus package, a bid that was quickly rejected by his fellow Republican, Senate Majority Leader Mitch McConnell.

“He’s talking about a much larger amount than I can sell to my members,” McConnell said of administration’s offer to House Speaker Nancy Pelosi and Democrats.

As he trails in polls with the election less that three weeks away, Trump said on Fox Business Thursday that he would go still higher than the US$1.8 trillion the White House has already floated to get a deal. He blamed Pelosi, who wants a US$2.2 trillion package, for standing in the way.

Pelosi, speaking to Democrats in a private conference call later Thursday, mocked Trump for facing opposition from his own party, according to a person on the call. She said while she doesn’t want to wait until January -- when Joe Biden might be sworn in as president -- to pass the next stimulus package, Democrats cannot give up fighting for their values, according to the person.

The speaker also reiterated a view from earlier this week, that her side has maximum leverage in the negotiations, another call participant said.

McConnell said earlier Thursday that the administration has already gone beyond what Republicans in the Senate could support, all but killing any chance for a stimulus in the near term. In a news conference in Kentucky, McConnell said the Senate will vote next week on a narrow stimulus plan worth roughly $500 billion to aid an economy still reeling from pandemic-induced shutdowns.

That amount is “what we think is appropriate to tackle this dread disease,” he said at one of several appearances in his home state.

Pelosi is scheduled to have another call with Treasury Secretary Steven Mnuchin Thursday in a continuing saga of talks on another fiscal boost for the economy.

Investor disappointment over the continuing impasse in the U.S. and new virus restrictions in Europe has weighed on stocks this week. The S&P 500 Index fell 0.2 per cent late in the session Thursday, off of its lows but still down for a third day.

Mnuchin said earlier Thursday that Pelosi’s “all or nothing approach doesn’t make sense for the American people,” but that the administration is “not giving up” trying for an agreement.

The president expressed frustration with Mnuchin, his main negotiator. “So far he hasn’t come home with the bacon,” Trump said.

Trump indicated he’d be open to calling Pelosi on the stimulus but doubted it would result in a deal. The two haven’t spoken directly in about a year.

Trump, who canceled negotiations last week and only days later reversed course to advocate a bigger stimulus than congressional Republicans support, said that Pelosi has “a lot of mental health problems and it’s going to be very hard to do anything with her.”

The president and speaker have each been questioning each other’s mental faculties. Pelosi said last week that Trump was “in an altered state right now,” and she suggested to colleagues that his thinking might be affected by the steroids he was given as treatment for COVID-19.

House Minority Leader Kevin McCarthy said the president’s latest US$1.8 trillion offer for a stimulus package is “a very big deal,” and, like Trump, blamed Pelosi for the stalemate. Asked at a news conference if he thought there would be a stimulus compromise before the election, McCarthy wasn’t optimistic.

“As long as Nancy Pelosi is involved, the answer is easily no,” McCarthy said. “She is the only hurdle, the only roadblock for us to be able to vote on something.”

Meanwhile, the economy continues to show evidence of the impact of a withdrawal of past fiscal stimulus -- just as anticipated by Federal Reserve policy makers and private economists alike.

Trump said Thursday that he did still think a deal is possible before Nov. 3 -- “because I think there’s a lot of pressure on Pelosi.”

Trump’s own undermining of his team, by endorsing a bigger package than they have fought for -- and that Senate Republicans oppose -- has encouraged the Democrats to hold out.

“Pelosi suggests that she has the leverage in negotiations with Mnuchin since President Trump seems anxious for a big pre-election deal,” said Sarah Binder, a political science professor at George Washington University and a senior fellow at the Brookings Institution. “The closer to the election a deal might be reached, the better for Democrats and the worse for Trump.”

--With assistance from Mario Parker and Saleha Mohsin.