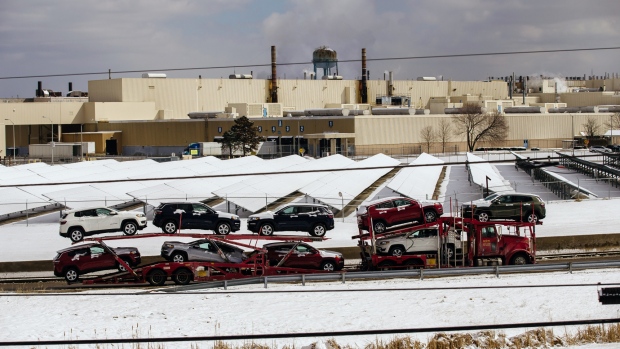 President Donald Trump said he wants an immediate start to talks between General Motors Co. (GM.N) and the United Auto Workers, extending to a third day his calls for the carmaker and union to reopen an Ohio factory.

“Get that big, beautiful plant in Ohio open now,” Trump said on Twitter early Monday, after sending a series of missives at GM and the UAW over the weekend. “Close a plant in China or Mexico, where you invested so heavily pre-Trump, but not in the U.S.A. Bring jobs home!”

“I am not happy that it is closed when everything else in our Country is BOOMING,” Trump said in a tweet Sunday after he said he had just spoken to Barra about the plant. “I asked her to sell it or do something quickly.”

Earlier on Sunday, Trump tweeted that “Democrat UAW Local 1112 President David Green ought to get his act together and produce.” He added, “Stop complaining and get the job done!”

General Motors and the UAW are going to start “talks” in September/October. Why wait, start them now! I want jobs to stay in the U.S.A. and want Lordstown (Ohio), in one of the best economies in our history, opened or sold to a company who will open it up fast! Car companies.....

....are all coming back to the U.S. So is everyone else. We now have the best Economy in the World, the envy of all. Get that big, beautiful plant in Ohio open now. Close a plant in China or Mexico, where you invested so heavily pre-Trump, but not in the U.S.A. Bring jobs home!

Just spoke to Mary Barra, CEO of General Motors about the Lordstown Ohio plant. I am not happy that it is closed when everything else in our Country is BOOMING. I asked her to sell it or do something quickly. She blamed the UAW Union — I don’t care, I just want it open!

GM didn’t address Trump’s tweet directly Sunday and declined to comment on the notion that Barra blamed the UAW for the closure of the Lordstown plant. The automaker did attempt to clarify its position that keeping open any of the plants that are slated to close are subject to labor negotiations with the UAW for a new contract this year. The current deal expires in September.

“To be clear, under the terms of the UAW-GM National Agreement, the ultimate future of the unallocated plants will be resolved between GM and the UAW,” GM said in a statement. “We remain open to talking with all affected stakeholders, but our main focus remains on our employees and offering them jobs in our plants where we have growth opportunities.”

The carmaker said it has placed more than 1,000 employees from so-called unallocated plants to other GM factories, adding that it has “opportunities available for virtually all impacted employees.”

In a telephone interview on Sunday, Green, the president of United Auto Workers Local 1112, responded, “We have produced and my act is together. Come on down and have a look.’’

The president is scheduled to make a trip to Ohio in the week ahead, with a stop at a tank factory in Lima.

Green, who’s been a critic of the president in the past, said Trump had pledged to preserve jobs in Trumbull County, where GM’s Lordstown plant is located, but the unemployment rate there was 7.7 per cent in January.

“They’re like empty promises because again, we’ve seen nothing but job loss in this area,” Green said. “And he thinks that the economy is doing so well?’’

Trump’s attack on Green was a change in focus from Saturday, when the president tweeted that “because the economy is so good, General Motors must get their Lordstown, Ohio, plant open, maybe in a different form or with a new owner, FAST!”

GM is threatening to close plants that build sedans and compact cars because consumers have been moving to sport-utility vehicles for several years. The plant had been used to produce the slow-selling Chevrolet Cruze compact car.

The automaker and its rivals also see an overall car market that was flat in 2018 at 17.3 million cars and trucks, and is predicted to fall this year.

To Trump’s point, that’s still a relatively strong car market, with sales hitting a record in 2016 at 17.6 million. For GM, its main problem was that even in a strong market, the company doesn’t need all the factories it has been running. Sales of the Chevrolet Cruze compact built in Lordstown fell 23 percent to just under 143,000 vehicles, according to GM’s reported sales.

Carmakers aim to use at least 80 percent of the production capacity they have in place, otherwise the plants usually lose money. At the time that GM announced that it was cutting plants in January, Lordstown was only using about one-third of its production, according to researcher LMC Automotive.

In November, GM included Lordstown on a list of four plants in the U.S. and one in Canada that could be shuttered by the end of 2019 if the automaker and its unions don’t come up with an agreement to allocate more work to those facilities. In the following month, Barra said in meetings with Ohio lawmakers that the future of the factory can turn on the outcome of labor talks.

The president cited Toyota Motor Corp.’s plans to add to its U.S. investments, announced Thursday, bringing the amount to almost $13 billion over five years ending in 2021.

Toyota, Japan’s largest automaker, has tried to work its way into Trump’s good graces after being a target of his tweets when he was president-elect in January 2017. Days after drawing criticism for plans to build Corolla cars in Mexico, Toyota announced a $10 billion, five-year investment plan. In August of that year, it unveiled plans with Mazda Motor Corp. to jointly build a $1.6 billion factory in Alabama.

The final Cruze rolled off the Lordstown production line on March 6. Republican Senator Rob Portman of Ohio called it a “sad day” and urged GM to use the site for future electric-vehicle production. A UAW spokesman said in a statement Sunday that the union’s “focus is on our members and to leave no stone unturned to keep the GM plants open.”