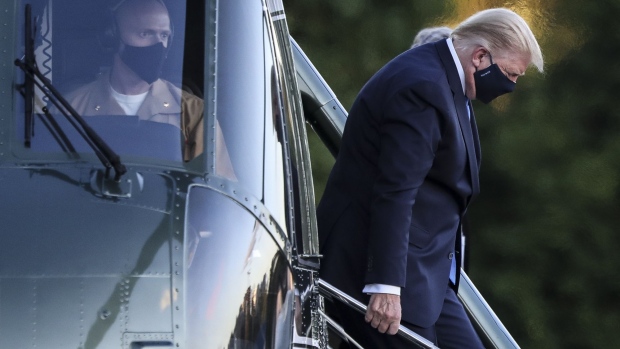 President Donald Trump’s re-election campaign has seen its candidate, campaign manager and party chairwoman all laid low by Covid-19. He is short on cash, Democrat Joe Biden is pulling away in the polls and his best hope to climb back -- the raucous rallies that fueled his 2016 win -- is on hold indefinitely as the last month of the race ticks away.

Trump is still dominating the news cycle, but for all the wrong reasons -- in the hospital, fighting the virus he sought to effectively erase from the story of his presidency as he appealed to voters for a second term.

Instead, coronavirus dominates the conversation around Trump. His own diagnosis sent him to Walter Reed National Military Medical Center on Friday, and the virus continues to spread inside the White House, seemingly due to the same indifference to basic precautions that Trump himself has demonstrated for months.

Whether he can participate in the final two presidential debates this month is an open question -- though voters hammered Trump’s performance in the first debate, when he interrupted Biden so much the former vice president finally told him, in vain, to shut up.

The litany of political disasters “certainly causes great worry in the closing weeks of a campaign in which the president is behind in polls and fundraising,” said Ed Rollins, a Republican strategist who heads the pro-Trump Great America political action committee.

Of the campaign leaders sidelined by the virus, he said: “These are the decision makers, and normally the workload only intensifies on these individuals in the closing days.”

White House Press Secretary Kayleigh McEnany tweeted Monday that she, too, had tested positive but had displayed no symptoms. In her statement, she insists she didn’t know about aide Hope Hicks’s positive diagnosis for coronavirus before she held spoke to reporters in the White House briefing room last Thursday.

“It certainly doesn’t help,” said Chris Wilson, a Republican strategist who worked on Senator Ted Cruz’s 2016 presidential campaign. “Assuming they all just have mild to moderate symptoms, it still slows things down and makes the campaign less nimble and responsive to news events. And this is 2020, so there will be events.”

Trump sought to re-energize his re-election effort, announcing “Operation MAGA,” an effort to flood the campaign trail with top surrogates like Vice President Mike Pence, Trump’s family and others.

Some of those surrogates joined the Washington Sunday shows, offering a sunny view of Trump’s health condition as doctors raised the possibility Trump could leave the hospital on Monday. With the approval of his medical team, according to the White House, Trump conducted a brief motorcade outside Walter Reed hospital to wave to gathered supporters on Sunday.

“None of us is Donald Trump, but we can still deliver Trump’s message,” Steve Cortes, a campaign senior adviser for strategy, said on Fox Business Monday. He pledged to “flood the zone with content,” including digital rallies and in-person events with surrogates as well as videotaped messages from the president until he can resume travel.

Meanwhile, some big donors Trump desperately needs are expressing anger and frustration that he could have prevented all of this by taking the virus more seriously since it emerged as a global threat in January. One donor who has given Trump at least US$100,000, Dan Eberhart, said the president’s appearance at a fundraiser on Thursday, after he learned that Hicks had contracted Covid-19, was “reckless.”

All of this comes on the heels of a debate performance so widely panned, a poll released Sunday -- taken between Tuesday’s debate and Friday’s news of the president’s infection -- found that Biden’s national lead had leaped to 14 points, from 8 before the debate. Biden also has set two records for monthly fundraising in August and September, giving him enough money to dominate Trump on the airwaves.

Biden’s campaign has tried to walk a respectful line, wishing his political rival and the first lady nothing but prayers and warm wishes and saying they would take down negative ads. But Biden didn’t abandon the campaign trail, traveling to Michigan on the same day Trump announced he had tested positive for coronavirus.

It wasn’t supposed to be this way. At the beginning of the year, riding high on the strength of the economy and a new trade pact with China, Trump’s re-election seemed likelier than not.

Now, Trump is out of topics he can use immediately to distract from his handling of the coronavirus pandemic, which has killed more than 210,000 people in the U.S. and collapsed the strong economy he planned to ride to a second term.

Pence will take on a higher profile and more intense campaign schedule to help fill the void while Trump is hospitalized, as will the president’s two adult sons, Donald Trump Jr. and Eric Trump, the campaign announced.

Pence will substitute for Trump at a rally in Peoria, Arizona on Oct. 8, a day after he is scheduled to debate Democratic vice presidential nominee Senator Kamala Harris in Salt Lake City, Utah.

The campaign relies heavily on Trump’s singular ability to energize voters and generate news. The longer he’s off the trail, the more difficult it will be for him to make up ground, Wilson said. That’s even more important given that millions of Americans are already voting early, and by mail.

Campaign officials say they believe investments in what’s called the “ground game” -- local offices and networks of paid staff and volunteers who drum up enthusiasm and help get out the vote for Trump -- will pay off on Election Day. The campaign has 285 field offices, double the number in 2016, and 2,000 paid staff, also about twice as many as in Trump’s first run.

“Trump needs to make some news and shake up the race further,” Wilson said. “The debates were his best chance to do that and the earned media and excitement his rallies generate were the second best chance. If he’s off the road for a week, or worse, two or more, that really kind of locks things in place where they are.”

And that place is behind.

Biden has been holding steady for months with a 6-7 percentage point lead over Trump nationally, on average. He also has held steady, if smaller leads in many states that are key to either candidates’ victory -- Florida, Michigan, Wisconsin and Pennsylvania among them.

That may change, and not in Trump’s favor. A Wall Street Journal/NBC poll released Sunday morning, taken between Tuesday’s debate and Friday’s diagnosis, showed voters sharply turned off by Trump’s performance. He incessantly interrupted and cross-talked Biden, belittled him for wearing a mask and attacked his family. Biden holds a 53 per cent to 3 per cent lead, his largest lead in that poll in the entire campaign.

The concern for Trump is that the poll is a harbinger of a full break among persuadable voters toward Biden.

The debate was “a shock to the system,” said Bill McInturff, a Republican pollster who directed the poll with Democrat Jeff Horwitt. “The public can be taking a moment to say, ‘What did I just see, and how do I feel about it?’”

Biden now holds a two-to-one advantage with female voters, and Trump’s margin of support among men over 50 dropped from 13 points over Biden to just 1 point, according to the poll.

But nothing is ever certain with Trump, a politician who has consistently managed to defy expectations. In October 2016, the release of “Access Hollywood” tapes revealing Trump saying crude things about women gave Democratic nominee Hillary Clinton a 14-point lead in one poll.

Biden is better positioned in key states including Pennsylvania, Wisconsin and Michigan than she was at this point her campaign. He also -- so far -- hasn’t been badgered by Russian hacks of his campaign emails or an FBI investigation.

Some Trump donors and fundraisers contacted by Bloomberg News said they’re continuing to do what they can to support the president’s re-election. “If anything, I think it’s inspiring folks to do more to pitch in,” said Brian Ballard, a lobbyist and member of the RNC’s Finance Committee.

Gaylord T. Hughey Jr., a Texas-based energy lawyer who raises money for Trump Victory, said Trump’s absence from the campaign trail would strengthen his base and supporters, who were already highly motivated to vote.