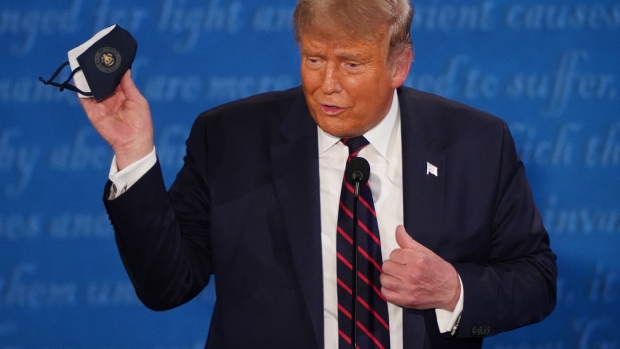 U.S. President Donald Trump holds a protective mask during the first U.S. presidential debate hosted by Case Western Reserve University and the Cleveland Clinic in Cleveland, Ohio, U.S., on Tuesday, Sept. 29, 2020. Trump and Biden kick off their first debate with contentious topics like the Supreme Court and the coronavirus pandemic suddenly joined by yet another potentially explosive question -- whether the president ducked paying his taxes. , Photographer: Bloomberg/Bloomberg

Donald Trump’s campaign manager proposed that his second and third debates with Democratic nominee Joe Biden should be pushed back a week, to Oct. 22 and 29, after the president ruled out participating in a virtual event.

The Commission on Presidential Debates announced earlier that the Oct. 15 town hall-style forum in Miami, the second of three presidential debates, would be conducted with the participants appearing from remote locations. Trump immediately rejected the idea.

“No I’m not going to waste my time on a virtual debate,” Trump said in a telephone interview with Fox Business Thursday. “That’s not what debating’s about.”

He said he would hold a rally instead.

The decision was made “in order to protect the health and safety of all involved,” the commission said in a statement.

Both campaigns said the commission acted unilaterally, without consulting them. Biden’s campaign said he had been prepared to accept the virtual format before Trump’s refusal. Biden now plans to find an “appropriate place” to take voter questions instead of the debate, and urged the commission to move the town hall to Oct. 22 -- the scheduled date for the third and final debate -- “so the President is not able to evade accountability,” the campaign said in a statement.

The change comes after Trump was hospitalized with COVID-19 over the weekend. The White House has reported that a dozen staffers have become infected with the virus, which has killed more than 210,000 people in the U.S.

Trump campaign manager Bill Stepien assailed the commission’s decision, saying that it was rushing to Biden’s “defense by unilaterally canceling an in-person debate.”

“President Trump will have posted multiple negative tests prior to the debate, so there is no need for this unilateral declaration,” Stepien said in a statement. “The safety of all involved can easily be achieved without canceling a chance for voters to see both candidates go head to head. We’ll pass on this sad excuse to bail out Joe Biden and do a rally instead.”

Later Thursday, Stepien agreed with the proposal to move the second debate back to Oct. 22.

“The CPD and the media cannot hide Joe Biden forever,” he said in another statement. “Americans deserve to hear directly from both presidential candidates on these dates, October 22 and 29.”

Moderator Steve Scully, C-SPAN’s political editor, will be live from the planned location of the Adrienne Arsht Center for the Performing Arts of Miami-Dade County, and the commission says the White House press pool will “provide coverage.”

Trump disclosed on Oct. 2 that he tested positive for COVID, almost two weeks before the next scheduled debate. He was hospitalized Friday before returning to the White House on Monday.

Trump has boasted of feeling better. The president’s doctor has refused to release key details since Monday, such as Trump’s specific vital signs, when he last tested negative, when he actually fell ill, and whether he’s still receiving a steroid, dexamethasone.

The virus has circulated widely throughout the White House. Aside from Trump and the first lady, aides Hope Hicks, Nick Luna, Stephen Miller and Kayleigh McEnany have all tested positive, as well as Stepien, former New Jersey Governor Chris Christie, who helped with debate prep, and several other aides.

Trump is pushing to return to normal, having gone to the Oval Office on Wednesday, despite still being in the active phase of the virus. The campaigns had haggled over rule changes after the first debate, which was marked by a series of interruptions from Trump in particular. The campaign has said that Trump “intends to be ready to debate” by Oct. 15, and had opposed rule changes, such as a mute button that would allow moderators to cut off the microphone of a candidate.

The idea of having the candidates debate each other from separate locations is not new. In the third debate of the famous 1960 debates between John F. Kennedy and Richard Nixon, the candidates sparred remotely with Kennedy in New York City and Nixon in Los Angeles.