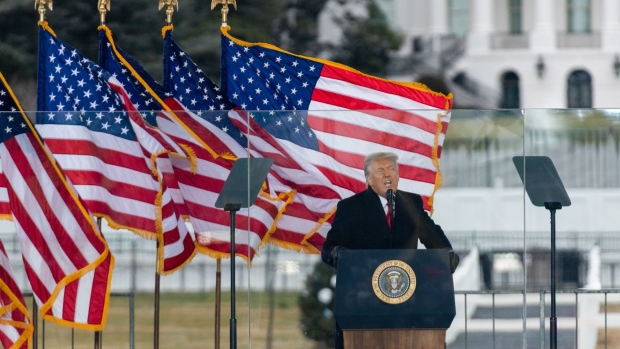 President Donald Trump is reportedly considering issuing himself a pardon, perhaps on his last day in office. Is he really allowed to do that? The best answer is simple: No.

Begin with the Constitution’s text, which states that the president “shall have the power to grant Reprieves and Pardons for Offenses against the United States, except in Cases of Impeachment.”

You might be tempted to read those words, as some specialists do, to mean that the president’s pardon power is unlimited, with the sole exception of impeachment. If that’s the right interpretation, there would be nothing wrong with self-pardons.

But there is an immediate qualification: Any president would be impeachable if he used the pardon power in certain ways. Suppose, for example, that a president pardoned everyone who committed crimes at his behest and on his behalf. That would be an impeachable offense.

This conclusion emerges clearly from the Virginia ratification debates of 1787, where George Mason objected to the apparent breadth of the pardon power, contending that it was a fatal defect in the proposed constitution. Mason urged that the president “ought not to have the power of pardoning, because he may frequently pardon crimes which were advised by himself.”

If so, Mason continued, “It may happen, at some future day, that he will establish a monarchy, and destroy the republic.”

There is one security in this case to which gentlemen may not have adverted: if the President be connected, in any suspicious manner, with any person, and there be grounds to believe he will shelter him, the House of Representatives can impeach him; they can remove him if found guilty.

Still, Trump might reason that since he’s already been impeached, and is leaving office soon anyhow, he should just go ahead and guarantee himself immunity from federal prosecution.

So the questions remain: What’s stopping him? Would a self-pardon be legally effective? If Trump pardons himself, would he be protected, in the future, from federal prosecution?

Despite the breadth of the constitutional language, the better view is that he wouldn’t be. A self-pardon should have no legal effect. There are two reasons for this conclusion, and they involve fundamental issues about mercy, self-government and the American experiment.

The first involves the origins and purposes of the pardon power. For a glimpse, pause over some words from Portia’s famous speech in “The Merchant of Venice”:

The quality of mercy is not strainedIt droppeth as the gentle rain from heavenUpon the place beneath.It is twice blessed:It blesseth him that gives and him that takes.

In less Shakespearean terms, the idea of the pardon, traceable to ancient Greece and Rome, was adopted in Britain in the form of a royal prerogative of mercy, by which the monarch could forgive wrongdoing, considering all the circumstances of the offense and the offender.

You might well see a pardon as an act of grace. A central goal was to authorize the Crown to display mercy to its subjects, blessing those that give and those that take.

The pardon power was borrowed and adapted to the U.S. context: a republic rather than a monarchy, where the people were citizens, not subjects.

Here again, a central idea involved mercy and forbearance. Drawing on the British heritage, Alexander Hamilton referred to “the mercy of the government.” But the founders were also pragmatists. Hamilton added that the “principal argument” for giving the pardon power to the president was that “in seasons of insurrection or rebellion, there are often critical moments, when a well timed offer of pardon to the insurgents or rebels may restore the tranquillity of the commonwealth.”

Whether we are speaking of Portia and mercy, or of strategic considerations in difficult seasons, self-pardons are foreign to the purposes of the pardon power, as it was understood in the American republic. With the American rejection of the monarchical heritage, the very idea of self-pardons would seem anathema, a cruel betrayal of founding ideals.

The second reason for forbidding self-pardons points to an ancient idea: No one may be judge in his own cause.2

That idea, at the core of the rule of law, is one of impartiality, and was well-known in the founding era. At the Constitutional Convention itself, Edmund Randolph of Virginia explicitly noted that “[t]he President may himself be guilty,” and urged that pardons should not be available to protect oneself.

In 1974, in the midst of the Watergate scandal that would soon force President Richard Nixon to resign, the Department of Justice cited the “fundamental rule” that no one may be judge in his own cause and concluded plainly, “The President cannot pardon himself.”

That was true in 1787, when the Constitution was ratified. It is true today.

1 You might wonder if some of Trump’s previous pardons of close associates – for example, of Roger Stone – were impeachable offenses. It’s a fair question, but we would need to know a lot of details about the background and circumstances to answer it.

2 There is a separate question, which is whether a president is permitted to issue a “prospective pardon,” that is, a pardon before a conviction or even a formal charge. In my view, he can, for reasons that would require a detailed discussion.

Cass R. Sunstein is a Bloomberg Opinion columnist. He is the author of “Too Much Information” and a co-author of “Nudge: Improving Decisions About Health, Wealth and Happiness.”