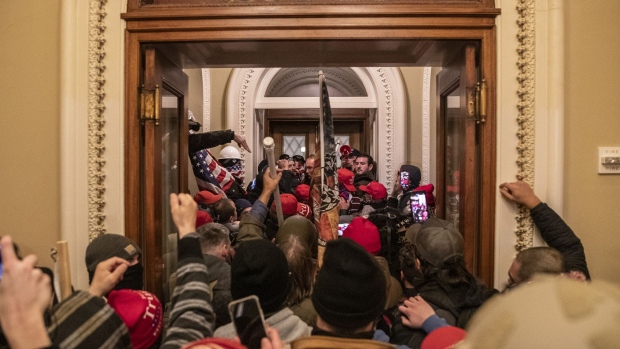 Trump supporters walk through the U.S. Capitol after breaching barricades to the building in Washington, D.C. on Jan. 6. , Photographer: Victor J. Blue/Bloomberg

(Bloomberg) -- A panel of federal judges grappled with how to settle executive privilege disputes between current and former presidents at a hearing over Donald Trump’s efforts to block Congress from accessing records related to the Capitol riot.

Trump invoked executive privilege in a lawsuit in October to stop the National Archives from releasing the documents to Congress, arguing that his right to keep White House records confidential extends past the end of his presidency. A U.S. district judge ruled against the former president on Nov. 9, a decision he promptly appealed.

Executive privilege is typically reserved for the current occupant of the White House, and in this case President Joe Biden has waived it. At the nearly four-hour hearing on Tuesday, three appeals judges in Washington peppered lawyers on both sides with questions about how to settle the novel legal issue of clashing privilege assertions.

“We don’t just flip a coin or draw straws or something,” U.S. Circuit Judge Robert Wilkins, a Barack Obama appointee, said. “What test are we supposed to use?”

Douglas Letter, a lawyer for the congressional committee seeking the documents, argued that the sitting president should win those disputes.

A lawyer for Trump, Justin Clark, called for an “objective test” supervised by the courts to weigh the competing assertions of executive privilege, and much of the hearing revolved around what such a legal test might look like.

“Any kind of test would have to be extremely deferential” to the incumbent president, said Brian Boynton, a Justice Department lawyer representing the National Archives.

The records that Trump is attempting to keep secret from the mostly Democratic committee include a trove of daily presidential diaries, call logs and drafts of speeches and correspondence related to the Jan. 6 insurrection. The committee of the U.S. House of Representatives requested the documents as part of investigation into the riot that it launched this summer.

At the hearing on Tuesday, the appeals panel offered little indication of how it will ultimately rule.

How to Weigh It

The transfer of the documents to Congress has been put on hold while the appeals court evaluates the case. In rejecting Trump’s lawsuit earlier this month, U.S. District Judge Tanya Chutkan, an Obama appointee, issued an emphatic endorsement of Congress’s investigation.

The “public interest lies in permitting -- not enjoining -- the combined will of the legislative and executive branches to study the events that led to and occurred on Jan. 6,” Chutkan wrote.

“Presidents are not kings,” she said, “and plaintiff is not president.”