President Donald Trump cast doubt on the future of his “phase one” trade deal with China, one of the biggest accomplishments of his first term, saying Friday that he’s struggling with Beijing in the wake of the global coronavirus pandemic.

“Look, I’m having a very hard time with China,” Trump said in an interview on Fox & Friends. “I made a great trade deal months before this whole thing happened. And it was kicking in, you know, a month ago and starting to kick in and starting to produce and then this happens and it sort of overrides so much.”

They pledged to create favorable conditions for implementation of the bilateral trade deal and cooperate on the economy and public health, according to a statement from the Chinese Ministry of Commerce.

But Trump has mused about somehow punishing China for the coronavirus outbreak, which has so far killed at least 75,000 Americans. He’s been asked this week whether he might impose tariffs on China because of the virus, which he has suggested is the result of research the country was conducting in a lab in Wuhan, China.

A statement from Lighthizer’s office following the phone call was more positive.

“Both sides agreed that good progress is being made on creating the governmental infrastructures necessary to make the agreement a success,” USTR said. “In spite of the current global health emergency, both countries fully expect to meet their obligations under the agreement in a timely manner,” the statement added.

Relations have deteriorated between the countries because of the coronavirus outbreak. Chinese officials have denied U.S. allegations that the pandemic is the result of work conducted at the Wuhan lab, and China’s foreign ministry has accused some U.S. officials of trying “to shift their own responsibility for their poor handling of the epidemic to others.”

The phone call was the first time Liu and Lighthizer have officially spoken about the agreement since it was signed in January, which was just before the coronavirus pandemic hit the world’s two biggest economies and upended global supply chains. The deal called for Liu and Lighthizer to talk every six months.

Speaking on Bloomberg Television, National Economic Council Director Larry Kudlow said that while the U.S.-China trade relationship is on track, Trump is “very keen” to bring more business back to the U.S. through incentives for companies.

“Too much emphasis on supply chains overseas is not safe, not reliable, not good business practice,” he said in an interview with Jonathan Ferro.

S&P 500 futures hit their session highs after reports that China and the U.S. had a phone call on trade. Japan saw gains of about 1.5 per cent, the largest moves, while shares also rose in Hong Kong, Shanghai, Seoul and Sydney. The yuan nudged higher.

Trump told reporters at the White House on Wednesday that he’d be able to report in the next week or two if he’s happy with how the trade deal is progressing.

Major sections in the deal

Chinese purchases of U.S. exports so far have been behind the pace needed to reach the target of the first year’s US$76.7 billion increase, as imports of U.S. goods declined by 5.9 per cent in the first four months of 2020 from a year ago due to the coronavirus outbreak. Given that imports in 2019 were smaller than 2017, the pressure to catch up is mounting.

The uncertainty and weaker economy caused by the coronavirus outbreak could impact China’s ability to meet those targets, including through lower domestic demand, clogged logistics and supply chains, and reduced U.S. capacity to supply goods and services. 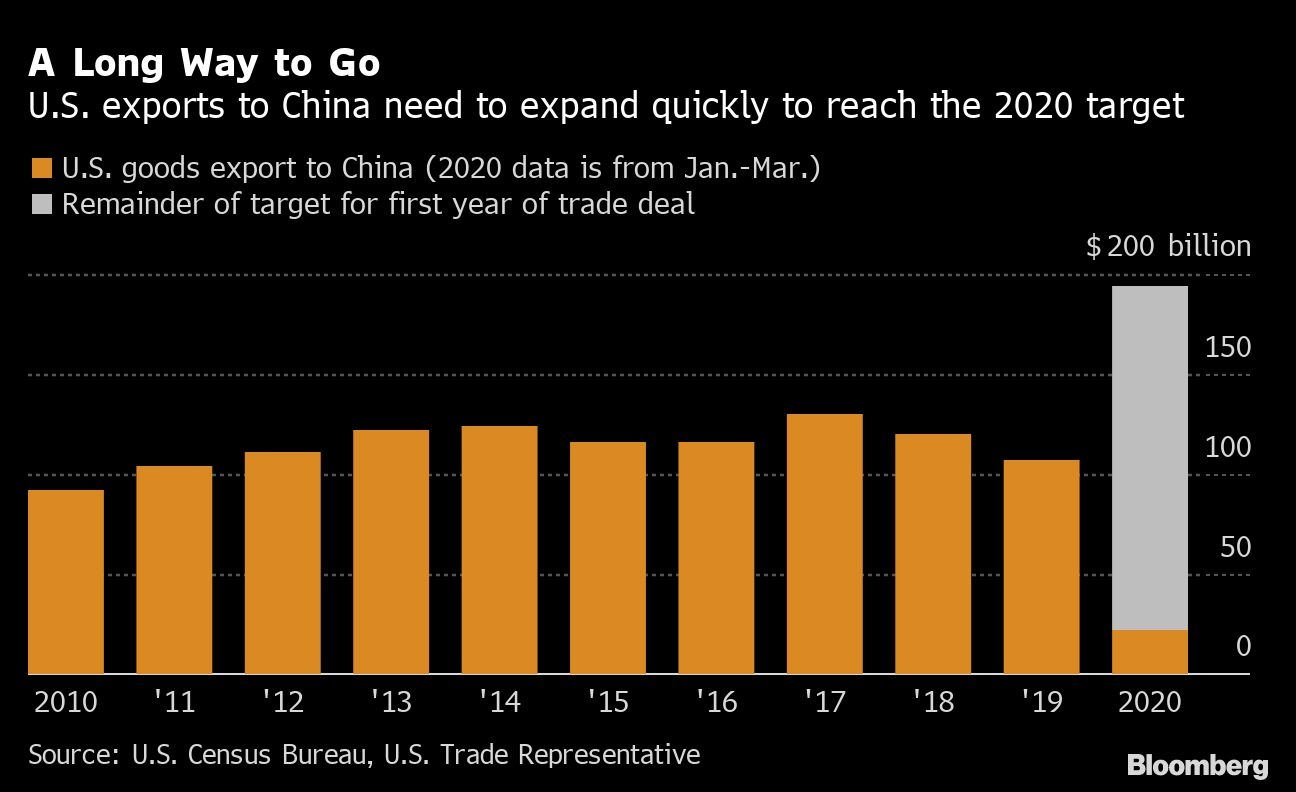 Some purchases are being made, with China buying six cargoes of soybeans Thursday and more than 600,000 tons of corn recently.

China has made progress in other sections of the the trade deal, lifting restrictions on a variety of U.S. agricultural imports including beef and poultry, scrapping foreign ownership limits in the financial sector and publishing a guideline on intellectual property protection.