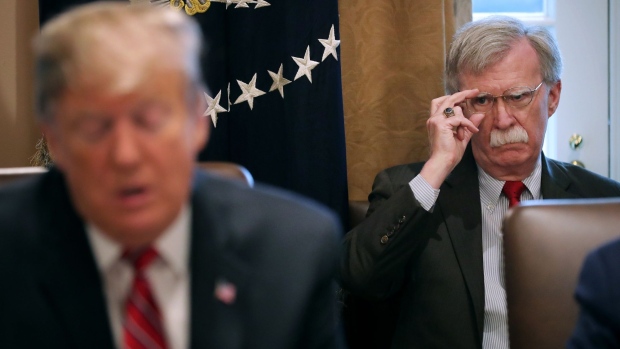 John Bolton listens to U.S. President Donald Trump talk to reporters during a meeting of his cabinet in the Cabinet Room at the White House Feb. 12, 2019. , Photographer: Chip Somodevilla/Getty Images

(Bloomberg) -- President Donald Trump claimed that John Bolton, the national security adviser he said he fired earlier in the week, was “holding me back” on Venezuela.

Trump didn’t elaborate in a tweet on Thursday. His administration has sought to collapse the government of Venezuela President Nicolas Maduro with expansive U.S. economic sanctions, a campaign Bolton eagerly promoted himself on Twitter.

The president has periodically refused to rule out military action against Maduro’s regime. His tweet came in response to one by Florida Senator Marco Rubio, who said he had spoken with the president on Thursday. If Trump changes the direction of Venezuela policy in Bolton’s absence “it won’t be to make it weaker,” Rubio said.

Elliot Abrams, the U.S. special representative for Venezuela, insisted Wednesday that Bolton’s departure will have no impact on policy in Washington, where he said support for opposition leader Juan Guaido “is truly bipartisan.”

To contact the reporter on this story: Alex Wayne in Washington at awayne3@bloomberg.net

To contact the editors responsible for this story: Alex Wayne at awayne3@bloomberg.net, Justin Blum