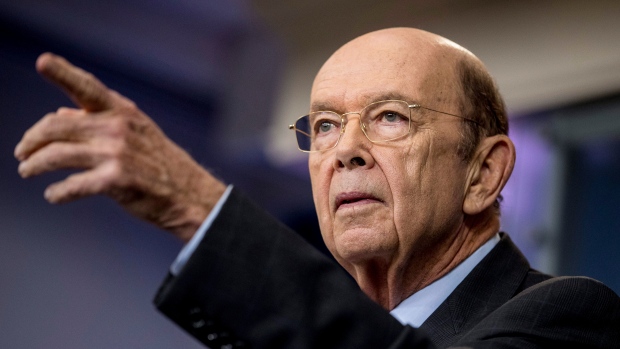 With the next round of NAFTA negotiations set to begin in Ottawa, U.S. President Donald Trump's commerce secretary says a new study proves the need for tougher rules on auto-parts imports in the continental trade agreement.

Wilbur Ross, says a study from his department to be released Friday shows American content dropped six per cent in Canadian auto imports, and 10 per cent in Mexican imports, from 1995, the year after NAFTA was enacted, through 2011.

Ross wrote in an op-ed in The Washington Post that the majority of this shifted imports away from North America, to continents not subject to the three-country trade agreement, in an apparent reference to growing purchases from Asia.

Ross wrote that this demonstrates the need to toughen the rules under NAFTA to increase how much content must come from within this continent to avoid tariffs.

"We cannot forget that the point of a free-trade agreement is to advantage those within the agreement -- not to help outsiders," Ross writes.

"Instead, NAFTA has provided entry into a bigger market for outside countries, and the United States is paying the price. While NAFTA has achieved its goal of increasing three-way trade in absolute terms, American workers and businesses are not benefiting in a way that is fair and reciprocal."

The current NAFTA requires that most vehicles contain 62.5 per cent North American content to avoid a tariff. The Trump administration is pushing for a higher threshold, perhaps beyond 70 per cent, and it has also hinted at a possible goal of insisting on a certain percentage of American-made content, a nation-specific carve-out that does not exist in the current agreement.

Automakers have also been able to skirt the existing 62.5 per cent content requirement by including modern electronics that did not exist among the categories of parts that were defined when the initial NAFTA went into effect in 1994.

"If we don't fix the rules of origin, negotiations on the rest of the agreement will fail to meaningfully shift the trade imbalance," Ross writes.

"Our nation's ballooning trade deficit has gutted American manufacturing, killed jobs and sapped our wealth. That is going to change under President Trump, and rules of origin are just the beginning."

Numerous auto parts makers have warned against tinkering too much with the rules.

They say that some of these components simply are not produced in North America, and that too-stringent rules will only induce producers to leave the continent entirely, shift production to Asia, and just pay the tariffs.

The third round of NAFTA negotiations is about to start in Ottawa, and the fourth round will be held early next month in Washington.

U.S. negotiators have hinted at their overall goal of more domestic content but have not provided specific details of their demands. Those details are expected to be put forward in the upcoming negotiating rounds.