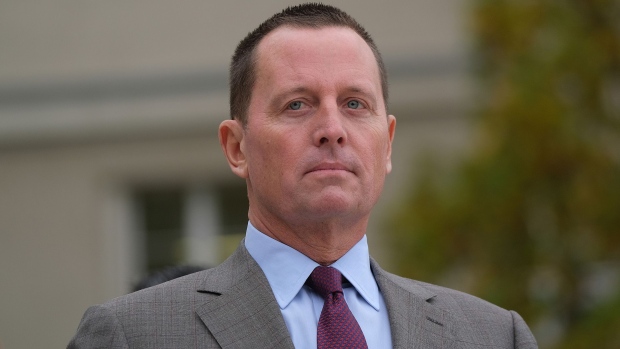 (Bloomberg) -- President Donald Trump is considering appointing Ric Grenell, the current U.S. ambassador to Germany, to be the next acting director of national intelligence, according to three people familiar with the matter.

Grenell is a Trump loyalist who was nominated to be ambassador to Germany in 2017 after having served as spokesman for the U.S. Mission to the United Nations in the early 2000s. He regularly caused friction with the NATO ally by demanding German companies leave Iran and warning them against working on a Russian gas pipeline, among other moves.

Grenell would be the highest profile, openly gay member of Trump’s administration, leading an intelligence community that for decades viewed homosexuality as a reason for suspicion and a firing offense. His appointment could be announced as early as Thursday, according to one of the people.

They asked not to be identified discussing a personnel matter. The New York Times reported earlier that Trump is expected to name Grenell to the job.

He will replace Joseph Maguire, a former Navy SEAL whom Trump appointed as DNI after the resignation of former Indiana Senator Dan Coats last year. Maguire has held the job in an acting capacity and Trump was required by law to either replace him or ask the Senate to confirm him in the position by next month.

Appointing Grenell in an acting capacity would avoid the need for a potentially complicated Senate confirmation, but Trump will face the same six-month deadline on his tenure.

Congress created the DNI position after the Sept. 11 terrorist attacks to coordinate the activities of U.S. intelligence agencies. It’s a Cabinet-level position that leads the U.S. intelligence community -- 17 organizations which include the Central Intelligence Agency, National Security Agency and National Reconnaissance Office. One of its key responsibilities is assembling the president’s regular intelligence briefings.

Grenell’s appointment could help bridge a divide between the president and his intelligence community, whose work Trump has questioned ever since he was told days before taking office that Russia meddled in the 2016 election to damage his opponent, Hillary Clinton. While Maguire has had a low profile as DNI, Coats was known for publicly countering some of the president’s assertions on issues ranging from Islamic State to North Korea.

In Berlin, the 53-year-old Grenell has eagerly taken up the Trump agenda, tangling frequently with Chancellor Angela Merkel and her coalition, demanding that Germany spend more on defense, withdraw support for the Nord Stream 2 gas pipeline and criticizing the government for its meetings with Iranian leaders.

That loyalty has given Grenell outsize influence in Trump’s inner circle. He was appointed the presidential envoy for Serbia and Kosovo, scoring quick wins that he trumpeted loudly: tentative agreement to open rail and road links between the two, and resume commercial flights.

Grenell has also taken a leading role in warning countries against incorporating China’s Huawei Technologies Co. hardware into their 5G telecommunication networks, tweeting threats to cut intelligence sharing if they do so. Ignoring that advice, he said, would be like “asking the KGB to install your phone lines.”

His fiery appearances on Fox News have earned him praise from the president. To other political appointees at embassies around the world, Grenell’s advice has been to get the president’s phone number and call him directly, circumventing the apparatus of the State Department.

That dynamic has engendered frosty relations with the department. Former Secretary of State Rex Tillerson blocked an early plan to appoint Grenell ambassador to NATO but allowed him to take Germany instead. And Grenell has had strained relations, at times, with Secretary of State Michael Pompeo, in part for his campaign to decriminalize homosexuality internationally, a move he took with Trump’s blessing but not Pompeo’s.

He opposed Pompeo’s decision not to issue a statement commemorating the International Day Against Homophobia, Transphobia and Biphobia, and was critical of an edict that Pompeo issued not to fly the gay pride flag from the same flagpole as the American flag at embassies across the world. When Pompeo visited Germany for the Munich Security Conference last week, Grenell brought his partner Matt Lashey to the airport to meet him.

To contact the editors responsible for this story: Alex Wayne at awayne3@bloomberg.net, Bill Faries